Ignite the Shadows releases tomorrow – the debut novel from the brilliant Ingrid Seymour. To celebrate, Ingrid has written a fascinating post on a subject close to her heart: sentient parasites. To find out more order your copy of Ignite the Shadows here. Here’s what Ingrid has to say on these amazing organisms . . . 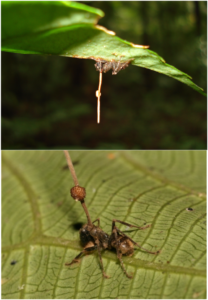 In Ignite the Shadows, the protagonist learns that half of the world’s population is infected with sentient parasites, which attack and eventually supplant the human brain. The creatures have slowly and over time infected half the planet, while the rest of the population goes on its merry way, unaware that their neighbours aren’t human anymore and, not just that, but are planning to become the top species on the planet.

Is it really that implausible? Is it ludicrous to think that a small organism could infect us and cause us to act against our will?

Because nature is spooky and works in amazing ways that defy our assumptions about what small organisms are capable of. Spooky enough to send the imagination reeling and make us fantasize about what could be going on amongst us that we don’t realize, and what an unseen, tiny creature might do to us if it were to evolve to infect us and control our behaviour.

Take for instance the Zombie Fungus (Ophiocordyceps unilateralis) which infects ants in tropical forests. The fact that a fungus can infect an insect and alter its behavior to the point of suicide is mind-boggling. Ants with the infection abandon their colonies to find humid areas that are suitable for fungi growth, all while their intruders grow directly from the top of their heads. The poor ants’ ordeal culminates with the fungus compelling them to clasp their mandibles to a leaf until they die a few days later, releasing spores into the air.

Then what about mice? Would altering the behavior of small rodents until they suddenly think that they’re friends with the neighborhood cats be a more impressive feat? I think so, especially when that feat is performed by an unicellular organism. This is just what Toxoplasmosis does. The infection overrides a mouse’s basic survival instinct, causing the rodent to be less afraid of predators, specifically cats. But the most amazing thing is why they do this. Well, it turns out that these parasites can only reproduce inside a cat’s gut, so getting Jerry to be eaten by Tom helps complete their life cycle. 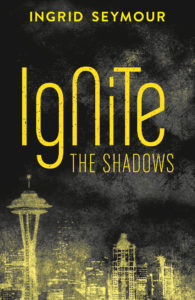 Wild, isn’t it? Wilder still is the fact that toxoplasmosis infects a third of the world’s human population and that several studies associate certain disorders and correlate suicidal behavior with the infection. That’s pretty scary stuff.

We may be at the top of the food chain, but the possibility of being at the mercy of some minute organism is terrifying and, consequently, just what Ignite the Shadows is all about.