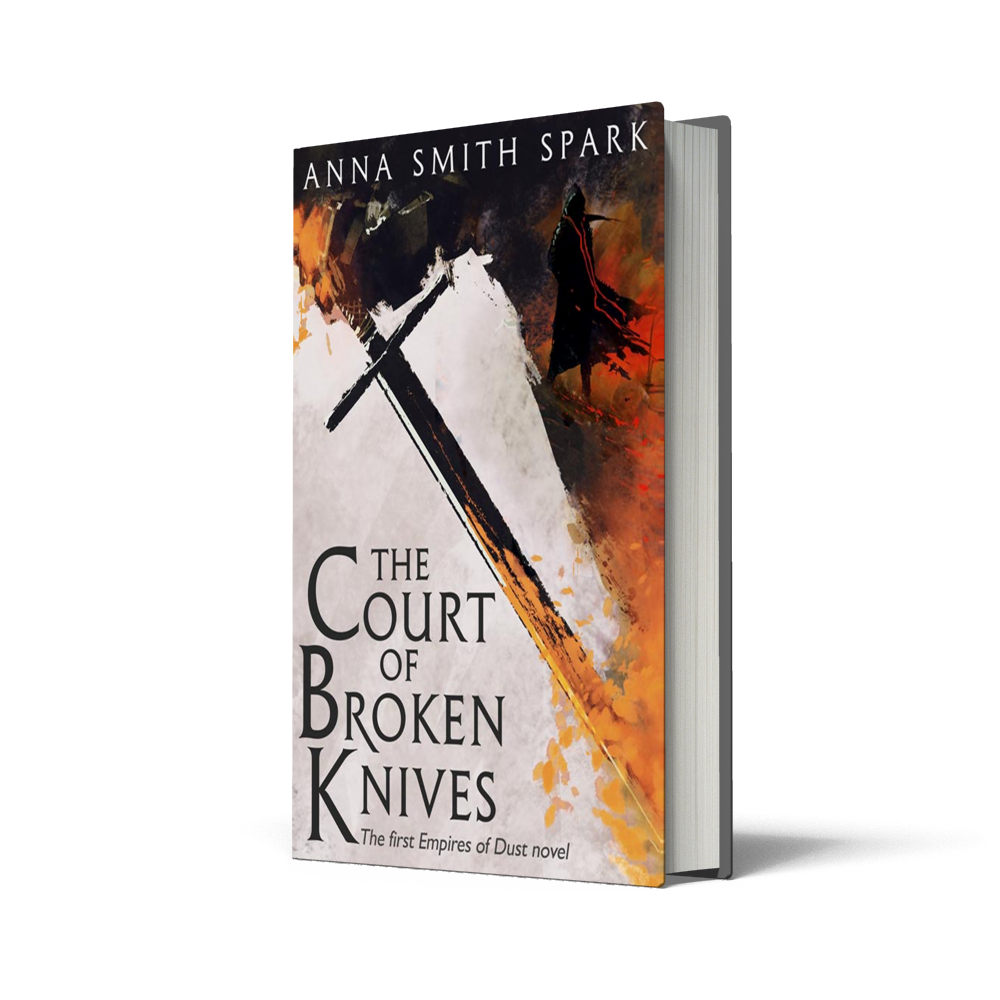 When I came to write The Court of Broken Knives, it was the world that came first, not the story. The story, in fact, is pretty simple, in the way that myths and folk tales often are. The first scene I wrote was a description of men in a desert, and violence, and they were travelling towards a great city, and that city was every fantasy city I have ever loved. Why they were travelling, what the purpose of this journey was and what would happen to them when they got there, was at first unimportant. But the joy of writing the desert … Of writing the city … Of writing a world …

In Xanadu did Kubla Khan

Where Alph, the sacred river, ran

Through caverns measureless to man

Down to a sunless sea.

The wonder of it. Marvels. Magic. Beauty. The dream of things so far beyond mundane reach. To enter a world that is not our own. Of course I enjoy the plot twists, the characters, the action. But it’s the evocation of other worlds that love most about fantasy as a genre. I want to wallow in another world, immerse myself in it, drown in it. I read fantasy like I read travel writing – to be there, to see it, to be removed from my own tedious time and place.

The unpurged images of day recede;

The Emperor’s drunken soldiery are abed;

A starlit or a moonlit dome disdains

All that man is,

The fury and the mire of human veins.

It was important to me in creating Irlast that the reader had a strong sense of this, that there was a far wider world outside the place that the characters happen to inhabit. I wanted to give a strong sense of history and of place. Two of the fantasy writers I most admire are R. Scott Bakker and Steven Erikson, simply because their worlds are so immense, so immersive, so detailed. The different languages, cultural mores, cultural myths of their world are so fascinatingly evoked by both these authors. There’s such a strong, vivid sense of being in a real place.

What shall we tell you? Tales, marvellous tales

Of ships and stars and isles where good men rest,

Where nevermore the rose of sunset pales,

And winds and shadows fall towards the West:

And there the world’s first huge white-bearded kings

In dim glades sleeping, murmur in their sleep,

And closer round their breasts the ivy clings,

Cutting its pathway slow and red and deep.

But I also wanted to create a sense of wonder, of romantic splendour. I wanted my world and my places to be unreal. These are not real places. They cannot possibly be real places. They are absurd beyond imagining. Fantasies on fantasies. Absurd. I have a great love of mythology and folk lore, and it’s the very impossibility of many of the stories that appeals to me. The god Thor wrestling with his own old age, and then draining so great a draft from a mead horn that he lowers the level of the cold North Sea. Grendell and his mother haunting the darkness outside the hall Heorot, and there is no explanation of who they are or why. The Grey Sisters, who can see the future, and who between them share one eye and one tooth. Cities in the desert haunted by jinns and strange spirits. The lamia calling in the desert. The Hollow Hills that are the borders between this world and the next.

What is that sound high in the air

Who are those hooded hordes swarming

Ringed by the flat horizon only

What is the city over the mountains

Cracks and reforms and bursts in the violet air

I don’t in fact world build. I make notes as I go along, of course, for consistency – and I make more detailed notes now following an unfortunate episode where I noticed, fortunately not too late, that we’d just spent three weeks marching west into the rising sun. But I didn’t world build before I wrote Broken Knives, and to be entirely honest I don’t world build that much as I go along. The world of Irlast genuinely emerges in my mind as I write it, unfolding itself. In my more pompous moments, I feel like it’s all there, real, unfurling itself like an unrolling map as I go. In my more depressed moments, I worry it’s a jerry-built wreak. But I .. I don’t really want to world build. I want the world I’m creating to emerge as I go. I want it to be mysterious, to have that dream-like quality to it that comes of it not being fully formed.  ‘Real’ reality isn’t explained. Most things in reality we don’t understand, we just take them for granted.  Most people don’t have a particularly clear grasp of history and geography. A convincing created world will have gaps, won’t explain everything.

I met a traveller from an antique land,

Who said—“Two vast and trunkless legs of stone

Half sunk a shattered visage lies, whose frown,

And wrinkled lip, and sneer of cold command,

Tell that its sculptor well those passions read

Which yet survive, stamped on these lifeless things,

The hand that mocked them, and the heart that fed;

And on the pedestal, these words appear:

My name is Ozymandias, King of Kings;

Look on my Works, ye Mighty, and despair!

Nothing beside remains. Round the decay

Of that colossal Wreck, boundless and bare

The lone and level sands stretch far away.”

One of my favourite books as a child was a very odd gazetteer of British folk lore and geography called Mysterious Britain. I used to walk the British countryside, the moors and coast paths and salt marshes, thinking of all the strange, often frightening things in that book. Witches. Ghosts. Fairies. Demons. The world was a very haunted place for me as a child. I wanted to bring that out in my writing, create in Irlast a world that was haunted. A mysterious world.

Sweet to ride forth at evening from the wells

When shadows pass gigantic on the sand,

And softly through the silence beat the bells

Along the Golden Road to Samarkand.

We travel not for trafficking alone;

By hotter winds our fiery hearts are fanned:

For lust of knowing what should not be known,

We take the Golden Road to Samarkand.

I spend a lot of time in the novel (some would day too much time, perhaps) trying to evoke the world of Irlast as a physical entity. As psychogeography, even – the place and the history and the emotional state of the observer within it, all bound up together. I have very strong memories of places and my response to them. I was once, for example, lost after dark on the salt marshes outside Dunwich. That’s really not the kind of thing you forget.  I wanted to put these things in the book, to evoke them for readers. To tell not the factual but the emotional history of my world.

The Court of Broken Knives by Anna Smith Spark is out now.