Authors Terry Newman and Jason LaPier have both recently had novels published that combined genres – crime and fantasy and crime and SF, respectively. Today they’re discussing combining genres and breaking down boundaries in fiction.

Editor John W. Campbell said that mystery and science fiction (and presumably fantasy) were incompatible genres because science fiction writer could invent ‘facts’ in his imaginary future that the reader would not know. This seems a good starting point to kick things off, do you agree?

Jason: And Isaac Asimov famously proved Campbell wrong with his detective-SF blend in The Caves of Steel, of course. It’s an interesting argument nonetheless, but it begs the question of why people are attracted to mystery fiction. Is it because they want to try to solve the mystery themselves, and would be frustrated by made-up facts? Or is it that they are there for the thrill of discovery, in which case the ‘invented’ aspects are only going to add to the mystery? Is it for the stakes, the thrill of danger that an unsolved murder provides? The plot of a mystery, with its clues and trails, may be what makes the story interesting, but I would argue that tension, characters, and stakes are what make a good mystery compelling. These things are right at home in a sci-fi or fantasy setting. 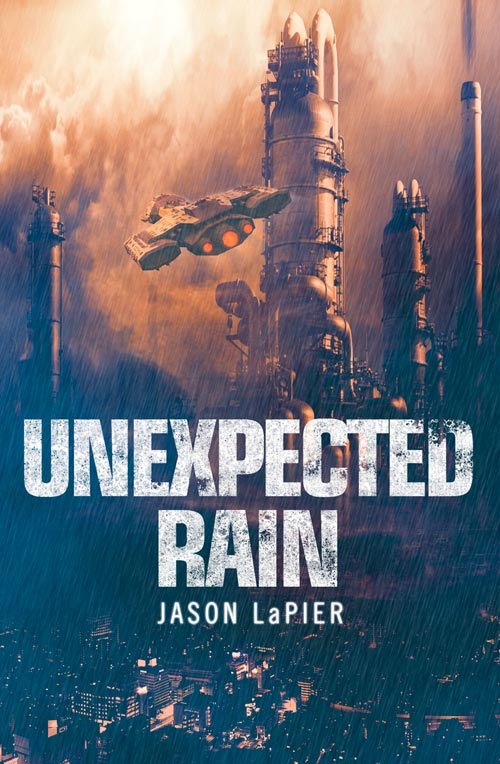 Terry: Agreed, and any detective writer can ‘cheat’ if they want to, you just don’t! And let’s face it, human behaviour doesn’t change much. Mind you, those elves are another thing entirely. How aware are you of detective and SF/fantasy genre considerations when writing?

Jason: I’m mostly aware of SF aspects, since so much of the setting and worldbuilding are defined by that half of the genre mix: locations, technologies, economics, sociology. However, the detective aspects are the plot-drivers and the tone-setters, so they get a fair amount of consideration from me as well.

Terry: I’m ‘hardly at all’ to be honest, but I think they are just ingrained by all my years of reading. It makes you aware of how much you can bend things without them breaking though, which raises the question: Did you regularly read both detective and SF fiction before you started your own writing?

Jason: I grew up on fantasy and science fiction and as I got older, developed a taste for mystery and more gritty and dark noir fiction. Early on, I was just enjoying the adventure and the escape, but later I needed the stakes to be raised. How about you?

Terry: Yes, I started reading science fiction and fantasy before crime and detective fiction as well. Quite a late entry into the grubby world of murder I was (honest!). However, I had always loved crime at the pictures, so that may have come first. What came first for you in your book – your murder or your universe?

Jason: It’s a great question, because honestly they both came individually and then got mashed together. Technically, the murder came first – in the form of a bit of flash fiction I had written long before I started my novel. It was not sci-fi at all. When I started developing the storyline for Unexpected Rain, I started with the two main characters and strung together a loose universe and plot around them. Then as I began to harden those things, I dug into my unconscious and plagiarized my own short story for the murder that kicks everything off. Honestly, it didn’t occur to me until later that I had reused exactly the same block-level murder scheme. Terry, I’m guessing your universe came first

Terry: You’re right! I wanted a real modern fantasy world, with all the associated problems. Most fantasy worlds are mock medieval and I just thought: ‘What would happen to them all given a few more hundred years of integration, an industrial revolution and the democratic process?’ The results had to be taken with a large pinch of salt, which is why A DEAD ELF can probably best be described as a comedy detective fantasy.

Jason: Do you worry that the need for exposition of the science/fantasy can get in the way of the murder? I think they go hand-in-hand to some degree when blending the genres: for example, my protagonists may find a clue hidden in a piece of programming code or use futuristic technology to track down a lead. But I try hard not to overdo exposition. I rely on sci-fi tropes to help fill in the gaps, and I lean heavily on the characters’ own ignorance to avoid over-explaining something. I certainly can’t explain how every piece of technology in my own life works, so I don’t see any reason someone 600 years in the future would either.

Terry: No, I don’t worry, because I don’t do it! I don’t mind if there are a few things that the reader won’t get. In fact I add them! This is because when I first read Raymond Chandler it was full of things from his 1950s world I didn’t know. It just added to the mystique for me.

Jason: Often in detective fiction, there are larger forces at work – e.g., political or organizational – beyond the scope of the case at hand and beyond the influence of the protagonist. In my version of the future, most of our Western political and economical constructs have been extrapolated, and capitalism has ‘won, so-to-speak. Public police forces have been replaced in off-world colonies by private companies offering law enforcement services, and these organizations are just as vulnerable to corruption, if not more so. In that sense, Unexpected Rain shares commonalities with a lot of detective fiction in that there are undercurrent forces of invisible connections, called-in favours, personal agendas, and financial, company-driven agendas that the protagonists encounter and have to manoeuvre around. How are you able to go about replicating these forces in an SF/F setting?

Terry: That’s another of the things I like about detective fiction, the ‘larger forces at work’ – just take Chinatown – for example. That’s something I wanted to bring to my fantasy by showing how these ‘larger forces’, like politics, might influence a world based on a traditional fantasy set-up with dwarves, elves, wizards and the full works in fact.

Jason: In a lot of distant-future science fiction, the scale of the story will be massive, epic – operatic. A murder mystery doesn’t play out that way though, and so even though the scope of Unexpected Rain involves hopping between planets, moons, ships, and solar systems, the scale is kept tight to only three point-of-view characters. Settings are tightly scaled as well: cells, offices, bars, and the one-on-one conversations that you get in detective fiction, as opposed to the war rooms or senate halls of epic SF. What did you think you need to do to a ‘standard’ SF/F setting to match it up with the atmosphere, style and theme of detective fiction?

Terry: For atmosphere I go with the descriptive passages. Really making them evocative rather that just, err, descriptive. For style I have to say I do what the dwarf says, he’s got more suits than me now. Theme deserves a more coherent answer, all I can say for now is that for each of the Detective Strongoak novels planned, there is a major theme being addressed. I don’t want to give too much away though.

Every detective has some special traits, something that makes them stand out from the rest. I deliberately chose a dwarf for my detective because I like the way that they can fit in everywhere. They are ‘everymen’, well except they are not men of course, but they don’t have the mystique which tends to go with elves and wizards, or the fallibility of men, or the personal hygiene problems of goblins. They are also usually less stoned than gnomes. Also Nicely is actually very tall, for a dwarf, and has never had a day’s worth of inferiority in his life. Good hats too. What makes your detective different?

Jason: In Unexpected Rain, Officer Stanford Runstom has been hunting a promotion to detective his whole career, and has been held back, so when he takes on the murder case, he does so against the orders of his superiors. He’s also an immediate stand-out wherever he goes because he was born and raised on a spaceship and the limited radiation filters affected his pigmentation development, and as a result, his skin has a remarkable green tint. He relies pretty heavily on the fugitive he’s trying to protect for advice and knowledge when it comes to technology.

To go back to the quote at the start: Do you worry about people who like their SF or fantasy ‘pure’?

Terry: It rather surprises me actually. I’ve loved detective SF from the first time I read Asimov’s Caves of Steel.

Jason: Their loss is what I say! I love some epic fantasy and sci-fi of course, but it can’t all be that way. Sometimes you need more grit, more mystery, and more ground-level characters, and that’s why mashing it up with detective work is a great way to twist the genres.