Jason LaPier (author of the fantastic murder mystery sci-fi – with cops, of course – UNEXPECTED RAIN) has shared his ratings of the worst-to-the-best sci-fi films featuring cops.

I love sci-fi no matter what the subject – interstellar flight, alien encounters, cyberspace hacking, technology gone horribly wrong – but I wanted to take a moment and celebrate one of my favorite mash-ups: cops in sci-fi films. I’ve wracked my movie-addled brain to come up with ten motion pictures that feature cops as significant characters. A few of these are some of my favorite movies of all time, and a few of these are just – well, not great. So I’ve pulled a rating system out of my hat and ranked them.

Here’s my rating scale (5 being the best):

1-5 guns for putting away bad guys

Known for being a giant bundle of potentially awesome sci-fi concepts haphazardly thrown together with the most tenuous of connections. The Aegis, an intergalactic police force, are represented on Earth by a marshal named Stinger Apini (Sean Bean). Not that it makes him a better cop, but Stinger’s DNA has been spliced with that of a bee. Because, why not?

Bonus: 0 points for being a character played by Sean Bean who doesn’t get killed

Detective Del Spooner (Will Smith) is the robophobic cop on the case when the leading roboticist famous for creating The Three Laws is murdered.

4 guns for all kinds of CGI-choreographed thrill rides

Sgt. John Spartan (Sylvester Stallone) is on a mission to rescue hostages from master criminal Simon Phoenix (Wesley Snipes). When it all goes wrong and hostages die, both are plunked into a freezer-prison, to be thawed out in 2032’s utopian San Angeles, where Spartan must once again put a stop to Phoenix’s rampages.

Aliens have landed and they’re almost like humans, so they move to Los Angeles. Detective Matthew Sykes (James Caan) has lost his partner in a shootout between ‘Newcomers’. He’s forced to work with Newcomer detective Sam Francisco (Mandy Patinkin), and they secretly pursue the case he’s been ordered to stay away from. 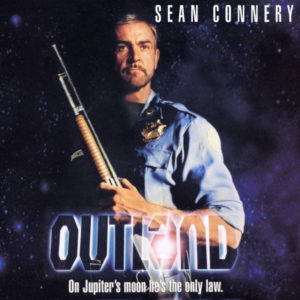 Sean Connery is Federal Marshal William O’Niel, assigned to keep the peace at a mining colony on one of Jupiter’s moons. He investigates some drug-induced suicides, earning the wrath of the local crime boss.

Officer Alex Murphy is the new guy in the underfunded police department of near-future Detroit. Shot-up and left for dead, corporate go-getters transplant his brain into a robotic body, and, well . . . you know the rest.

3 badges for unrelenting policing and making use of video evidence

An energy crisis has plunged future Australia into chaos, and only Main Force Patrol can keep the motorcycle gangs in check. Max Rockatansky (Mel Gibson) spars with baddies, losing friends and family in a spiral of revenge.

5 guns for killing six bloodthirsty marauders, including their leader Toecutter

Bonus: 5 points for kicking off a dystopian franchise

In 2054, Captain John Anderton (Tom Cruise) is chief of the PreCrime division, where immobile psychics are used to see hard crimes before they happen. But what will he do when one of their visions implicates himself?

Bonus: 5 points for user interfaces we still dream about

A potent and dangerous drug has addicted one fifth of the population of the near future, and undercover agent Bob Arctor (Keanu Reeves) is part of a big-brothery initiative that involves infiltrating paranoid drug users and pushers, including Arctor’s own housemates.

3 badges for going undercover (and confusingly spying on himself)

Bonus: 5 points for sacrificing his own sanity to break a drug distribution ring, and 5 more points for the film’s amazing rotoscoped animation

Near-future Los Angeles police officer Rick Deckard (Harrison Ford) is forced out of retirement when four replicants – bioengineered humanoids – have made their way to Earth and started murdering people. Deckard is a loner, a drunk, and the best goddamn Blade Runner there is, so it’s up to him to track down the replicants and ‘retire’ them.

5 badges for finding cool clues, including serial numbers on artificial snake scales and images in mirrors just out of frame on photographs

So there you have it. I honestly didn’t intend for the highest three scores to be films that were based on Philip K. Dick stories, but it’s not surprising – he is one of my favorite authors. Just writing this post puts me in the mood to re-watch some of these, so I’m off to thumb through my DVD collection!

You can buy UNEXPECTED RAIN here for £1.99 (or for $3.99 in the US)! Follow the author on Twitter @JasonWLaPier and at http://jasonwlapier.com/