It’s Jack Colman’s publication day for Viking-esque fantasy debut The Rule, so we’ve invited him to regale us with how growing up in Yorkshire has inspired the most brutal of tales…

Every winter, when I was in secondary school, I’d keep an eye on the classroom window for the first flakes of snow falling outside. If it kept up for any length of time, someone would come around to pull me and the other hill kids out of lessons, and we’d be rushed home before the roads became impassable. Every year we were treated to time off school as a result of being cut off, sometimes for days on end. Walls of snow six feet high would pile up at either side of the moorland road. Driving through it was like crawling through an endless tunnel of blinding white light. 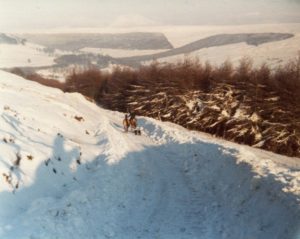 My first novel, The Rule, is set in a similarly isolated environment. I didn’t make the link at the time of writing, and certainly the place I grew up in is marginally less savage than Helvik, but I doubt it was a coincidence. Our family home is around ten miles from the nearest town. Traffic is so rare that the sheep spend their nights stretched out on the road enjoying the residual warmth of the tarmac. If a farmer rolls his tractor or cuts off his toe, the air ambulance has to fly in from forty miles away and land in one of the fields. Perhaps a surprise, then, that four out of five of us kids were born at home. My mum and dad still disagree over which one of them delivered me.

In The Rule, isolation has afforded Gunnarr and the rest of the town’s inhabitants a degree of freedom, but they are soon to learn that it has also left them dangerously vulnerable, both individually and as a realm. This conflict between freedom and vulnerability is something I encounter frequently when I speak of my plans to return to a rural way of life. People ask: ‘How can you feel safe when there’s no one else around?’ I’m thinking: ‘What could be safer than having no one else around?’

I have only positive associations with my childhood in the countryside. Things that seemed ordinary then become inspirational now, hopefully helping me to bring a degree of authenticity to my work, particularly when a story has a historical setting. We used to lie on our bellies and drink water fresh from the streams and rivers. Sometimes the electricity would go off for days, and we’d live only by candlelight. Every so often we’d stumble across a bloated sheep carcass, rigid limbs sticking out like the legs on a table, covered in bluebottles as big as bumble bees. We’d build up dry stone walls, dig ditches in torrential rain, slog for miles through knee-deep snow or bright purple heather, passing slanted old waystones covered in marks carved by ancient hands.

As for the Norse theme, the links were everywhere, from the dialectic words to the names of hills and houses and rivers. We’d climb down ghylls and bike along riggs. Drive by Danby (village of the Danes), Great Fryup (Freyja’s Valley, not a breakfast café) and the ever-amusing Wetwang (wet field). Even my own little valley, remote even in 2015, appears to be named for a Norseman named Brandr, who presumably crossed the moors a thousand years ago.

In writing, imagination is all that is really required. I wrote my book in central London, in a student halls room about as wide as the span of my arms and a mouldy ex-council flat. I’m certain there are people who could have done twice the job I did having spent their lives in a basement flat in Brixton. I don’t think growing up where I did made it easier to write a book like The Rule, but it certainly made it more difficult not to. 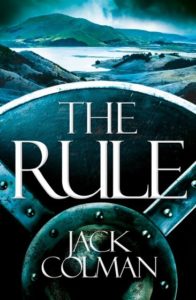