Read the first chapter of THE VAGRANT

Tomorrow, Peter Newman’s incredible epic fantasy THE VAGRANT, will be released in paperback. If you haven’t read it yet, now is your chance to start a brand new epic fantasy series. Read the first chapter below, or order your paperback right here. 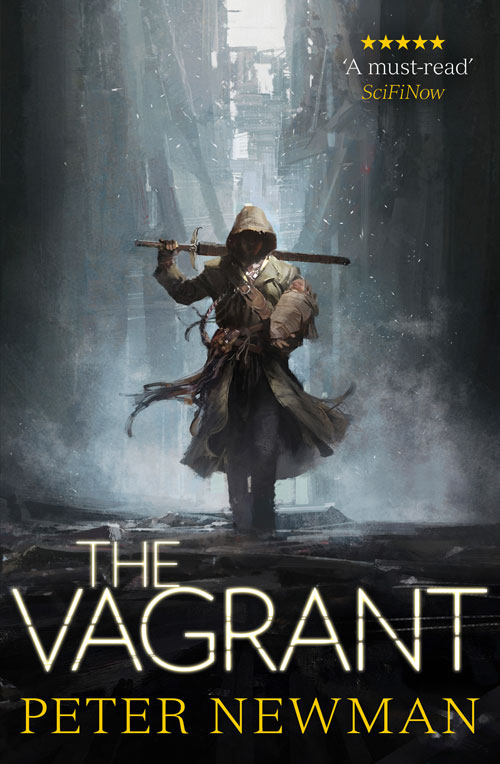 Starlight gives way to bolder neon. Signs muscle in on all sides, brightly welcoming each arrival to New Horizon.

The Vagrant does not notice; his gaze fixes on the ground ahead.

People litter the streets like living waste, their eyes as hollow as their laughter. Voices beg and hands grasp, needy, aggressive.

The Vagrant does not notice and walks on, clasping his coat tightly at the neck.

Excited shouts draw a crowd ahead. A mixture of halfbloods and pimps, dealers and spectators gather in force. Platforms rise up in the street, unsteady on legs of salvaged metal. Wire cages sit on top. Within, shivering forms squat, waiting to be sold. For some of the assembled, the flesh auction provides new slaves, for others, fresh meat.

Unnoticed in the commotion, the Vagrant travels on.

The centre of New Horizon is dominated by a vast scrap yard dubbed ‘The Iron Mountain’, a legacy from the war. At its heart is the gutted corpse of a fallen skyship; its cargo of tanks and fighters has spilled out in the crash, forming a skirt of scattered metal at the mountain’s base.

Always opportunistic, the inhabitants of New Horizon have tunnelled out its insides to create living spaces and shops, selling on the sky-ship’s treasures. Scavenged lamps hang, colouring the shadows.

Tne tunnel is illuminated by a glowing hoop, off-white and erratic. In the pale light, the low ceiling is the colour of curdled milk.

Awkwardly, the Vagrant enters, bending his legs and bowing his head, his back held straight.

Corrugated shelves line the walls, packed with bottles, tins and tubes. The owner of the rusting cave hunches on the floor, cleaning a syringe with a ragged cloth. He appraises the Vagrant with a bloodshot eye.

Syringe and cloth are swiftly tucked away and yellowing fingers rub together. ‘Ah, welcome, welcome. I am Doctor Zero. I take it you’ve heard of me?’

‘Of course you have, that’s why you’re here. Well, what can I get you? You look tired. I have the finest selection of uppers this side of the Breach, or perhaps something to escape with?’ His eyes twinkle, sleazy, seductive.

One hand still on his collar, the Vagrant’s amber eyes roam the shelves. They alight on a small jar, its label faded to a uniform grey.

‘Ah, a discerning customer,’ says Doctor Zero, impressed. ‘Rare to have somebody who knows what they’re looking for. Most of the rabble I get through here can’t tell the difference between stardust and sawdust.’ He picks up the jar, flicking something sticky from the lid. ‘I assume whoever sent you appreciates the scarcity of good medicine . . . and the cost.’

In answer, the Vagrant kneels and places two platinum coins on the ground, sliding them across the floor towards the Doctor.

‘I hope you aren’t trying to trick me,’ the Doctor replies, picking them up and tapping each one in turn with his finger.

The coins vibrate and a brief two-note duet fills the cramped space. For a moment neither speak, both moved to other memories by the sound.

Doctor Zero holds them to the light, the clean discs incongruous with his sallow skin. ‘My apologies,’ he says, handing the jar over quickly, hoping no change will be asked for.

‘And if you have any other needs, don’t hesitate to come back.’

Doctor Zero watches the Vagrant go, his fingers twisting together, untwisting and twisting again. He picks up the syringe and, after a moment’s deliberation, pricks his finger on it, wincing at the little stab of pain. A bead of blood appears on the end of his finger. He waits until it has grown to the size of a small pea and then whispers his message.

The Vagrant makes his way towards the city gates, famous for always being open. The Demagogue, demonic caretaker of the city, claims this is because New Horizon admits anyone, a lie to conceal their dysfunction. The great engines that control the gates are silent, critical parts stolen or broken long ago.

Beggars’ cries mix with heavy drumming and the taste of sweat. A girl, aged prematurely by life, pulls at the Vagrant’s arm. ‘Ey, you come from Zero’s? You wanna share?’ She runs a hand over her curve-less frame. ‘You give me high, I give you ride. Big high, big ride.’ The Vagrant stops, looking at her hand until she withdraws it. He walks on, the girl’s stream of curses following after.

A large, hound-like animal sits on its haunches, square in the middle of the road. Tainted by infernal influence, it is larger than its ancestors, fearsome, ferocious, a Dogspawn. No Handler is in sight and the usually easy-going wastrels of New Horizon give it a wide berth.

The Vagrant does the same.

It watches him with mismatched eyes. One canine, black in the poor light, unreadable, but the other human one: it flickers in recognition. Somewhere outside the city a Handler watches, viewing the wanderer through their swapped orbs.

For a time, both are still and the crowd follows the lead of the fading stars above, retreating, one by one into the darkness.

The Dogspawn pants heavily, its foul breath adding to the thick cocktail of smoke and rot that passes for New Horizon’s air.

The Vagrant does not run. There is no point. Over the years, desperate prey has tried many things to hide its scent from these half-breeds: perfume, mud, excrement, even the blood of another member of the Dogspawn’s pack.

The hunters do not track the body’s scent. The Vagrant knows this: it is why the rest of the pack and their Handlers lie dead.

With a growl, the Dogspawn stands up, refuse clinging to blood-crusted legs. It pads forward with difficulty, dragging itself through the muck.

Eight metres from him, the Dogspawn leaps. It is a weak gesture, a mere suggestion of its usual power.

The Vagrant steps back, leaving it to sprawl exhausted at his feet. Its flanks heave, gasping and ragged. Blackish blood dribbles from its rear. Soon, it will die. The growls soften, become a whine which gives way to a fading, wheezy pant.

The Vagrant steps around the body but the Dogspawn is not quite dead. It snaps at him with the last of its strength, too slow to catch his ankle, but the long teeth snare his coat.

The Vagrant pulls at it, once, twice, the Dogspawn glaring at him through half-closed eyes. Its jaws stay locked onto the worn material in a last act of defiance. The Vagrant continues to pull: harder and more urgently until fabric tears on teeth. He pulls free but there is a cost, his coat is opened by the struggle.

The Dogspawn’s eyes open one final time, widening at what is revealed.

In the crook of his arm, a baby sleeps, oblivious; chubby cheeks are dusted with fever spots. A sword hangs at the Vagrant’s side, a single eye glaring from the crosspiece. It returns the Dogspawn’s dying stare, peering beyond to find the tether of essence that will lead to its tainted Handler.

Swiftly, the Vagrant walks towards the great gates of New Horizon, pulling his coat about him once more.

The rust-bruised gates loom high, thick chains frozen along their length. To their right is a watchtower, ruined, its broken roof hanging from defunct cables.

The Vagrant passes under its shadow and over the city’s boundary, walking purposefully into the gloom beyond.

Chunks of rock jut out across the barren landscape, a row of giant’s teeth. Repeated bombardments and exposure to poisonous demonic energies have taken their toll on the environment. Craters pepper the ground like pockmarks. There are no trees, no colour and little life to be seen. The Blasted Lands are named without irony.

From nearby a cry rings out, quickly muffled. It is enough.

The Vagrant turns and moves toward the sound.

Behind a jagged slab of stone sits the Handler cradling his head. His dark animal eye has necrosed in his skull, making nerve endings scream. The Handler does not know he is found.

The Vagrant crouches, carefully lays the baby in the dust. He stands slowly, his blade singing as it tastes the air.

Now the Handler realizes. He scrabbles backwards, promises babbling from his lips until the Vagrant’s shadow covers him.

Abruptly there is silence.

Stick-like people and bloated flies gather in the twilight, both drawn to the still warm corpse of the Dogspawn. By morning they have picked the bones clean. By afternoon half of the people have died, their stomachs unable to accept the rich meat. By evening their skeletons are bartered over by Necrotraders.

In New Horizon nothing is wasted.

Want to keep reading? THE VAGRANT is available in paperback on 25th February. Pre-order your copy now.