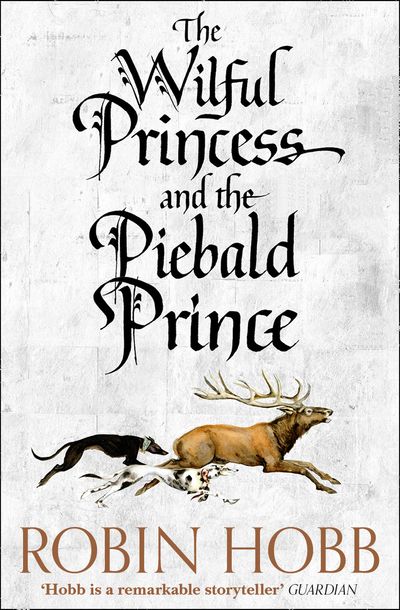 Long before the time of Chivalry Farseer, there was another indiscreet member of the royal line. Princess Caution Farseer, in defiance of her name, was headstrong and willful, destined to fall dangerously in love where she ought not.

The child she bore, a Witted boy known as the Piebald Prince, rose to favour despite his questionable bloodlines. But the dukes of the Six Duchies backed Canny Farseer for the throne. And so both young men competed for power… But this was not their only struggle: for they both fell in love with the same lady. Such rivalry could end only in bloodshed…

A tale of love and secrets, magic and manipulation, heartbreak and murder most foul: only a true-tongued minstrel can reveal the real story of the Wilful Princess and the Piebald Prince.

Author: Robin Hobb
Format: Paperback
Release Date: 30/11/2017
Pages: 160
ISBN: 978-0-00-824500-9
Robin Hobb is one of the world’s finest writers of epic fiction.She was born in California in 1952 but raised in Alaska, where she learned how to raise a wolf cub, to skin a moose and to survive in the wilderness. When she married a fisherman who fished herring and the Kodiak salmon-run for half the year, these skills would stand her in good stead. She raised her family, ran a smallholding, delivered post to her remote community, all at the same time as writing stories and novels. She succeeded on all fronts, raising four children and becoming an internationally best-selling writer. She lives in Tacoma, Washington State.