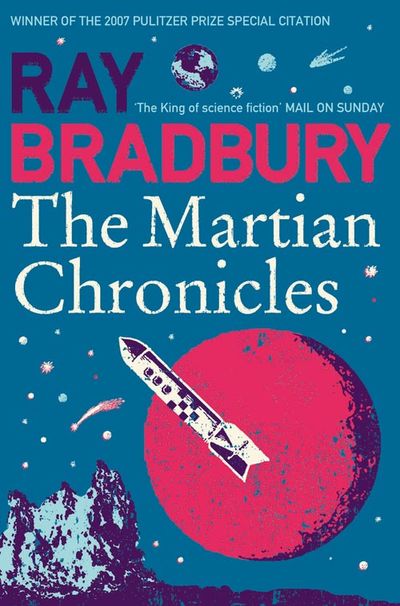 The strange and wonderful tale of man’s experiences on Mars, filled with intense images and astonishing visions.The classic work that transformed Ray Bradbury into a household name.

Written in the age of the atom when America and Europe optimisitcally viewed the discovery of life on Mars as inevitable, Bradbury’s 1940s short stories of a brutal, stark and unforgiving martian landscape were as shocking and visionary as they were insightful.

‘The Martian Chronicles’ tells the story of humanity’s repeated attempts to colonize the red planet. The first men were few. Most succumbed to a disease they called the Great Loneliness when they saw their home planet dwindle to the size of a pin dot. Those few that survived found no welcome. The shape-changing Martians thought they were native lunatics and duly locked them up.

More rockets arrived from Earth, piercing the hallucinations projected by the Martians. People brought their old prejudices with them – and their desires and fantasies, tainted dreams. These were soon inhabited by the strange native beings, with their caged flowers and birds of flame.

Author: Ray Bradbury
Format: Paperback
Release Date: 01/12/2008
Pages: 320
ISBN: 978-0-00-647923-9
One of the greatest science fiction and fantasy writers of all time, Ray Bradbury was born in Waukegan, Illinois, in 1920. He moved with his family to Los Angeles in 1934. Since his first story appeared in Weird Tales when he was twenty years old, he published some 500 short stories, novels, plays, scripts and poems. Among his many famous works are Fahrenheit 451, The Illustrated Man and The Martian Chronicles. Ray Bradbury died in 2012 at the age of 91.

The strange and wonderful tale of man’s experiences on Mars, filled with intense images and astonishing visions.The classic work that transformed Ray Bradbury into a household name.