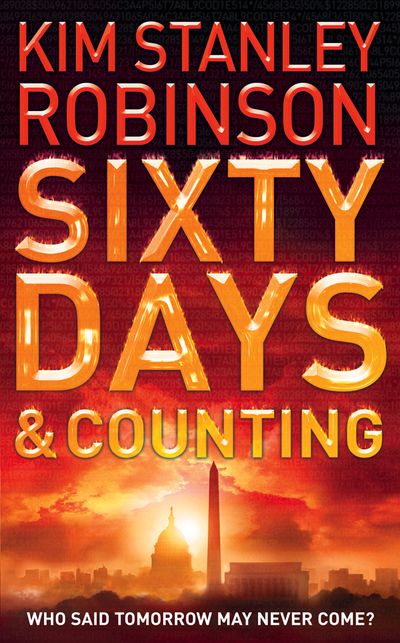 In his first sixty days, President Phil Chase intends to prove he can change the world and solve climate change. A highly topical, witty and entertaining science thriller – the follow-up to Forty Days of Rain and Fifty Degrees Below.

Frank Vanderwal, in the office of Presidential science advisor, finds something reassuring about the world being so messed up. It makes his own life look like part of a trend. He’s been homeless for a year, the ex-husband of the love of his life did permanent injury to his nose – probably his brain – with a punch, and the love of his life has had to go into hiding from the secret service, which has Frank under surveillance, too … but meanwhile there’s the world to save. Frank’s a scientist. He has to save the world so that science can proceed, obviously. This has become known as the Frank Principle.

China is close to meltdown, the security agencies are in overdrive, carbon figures are close to cooking the world … and the team has sixty days to establish a new reality.

Author: Kim Stanley Robinson
Format: Other Format
Release Date: 11/04/2013
ISBN: 978-0-00-740513-8
Kim Stanley Robinson was born in 1952 and, after travelling and working around the world, has nowsettled in his beloved California. He is widely regarded as the finest science fiction writer working today, noted as much for the verisimilitude of his characters as the meticulously researched hard science basis of his work. He has won just about every major sf award there is to win and is the author of the massively successful and lavishly praised Mars series.

In his first sixty days, President Phil Chase intends to prove he can change the world and solve climate change. A highly topical, witty and entertaining science thriller – the follow-up to Forty Days of Rain and Fifty Degrees Below.