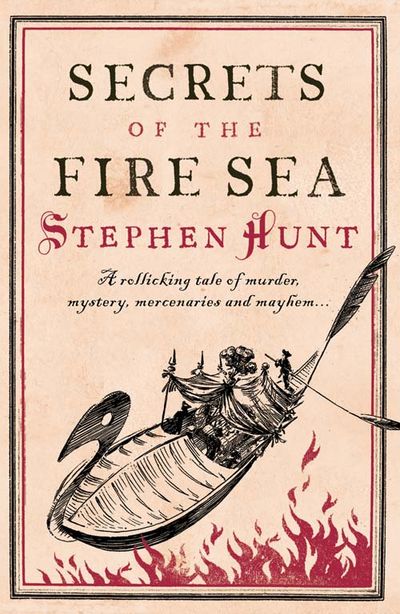 Secrets of the Fire Sea

A tale of high adventure and derring-do set in the same Victorian-style world as the acclaimed The Court of the Air and The Rise of the Iron Moon.

The isolated island of Jago is the only place Hannah Conquest has ever known as home. Encircled by the magma ocean of the Fire Sea, it was once the last bastion of freedom when the world struggled under the tyranny of the Chimecan Empire during the age-long winter of the cold-time. But now this once-shining jewel of civilization faces an uncertain future as its inhabitants emigrate to greener climes, leaving the basalt plains and raging steam storms far behind them.

For Hannah and her few friends, the streets of the island’s last occupied underground city form a vast, near-deserted playground. But Hannah’s carefree existence comes to an abrupt halt when her guardian, Archbishop Alice Gray, is brutally murdered in her own cathedral.

Someone desperately wants to suppress a secret kept by the archbishop, and if the attempts on Hannah’s own life are any indication, the killer believes that Alice passed the knowledge of it onto her ward before her saintly head was separated from her neck.

But it soon becomes clear that there is more at stake than the life of one orphan. A deadly power struggle is brewing on Jago, involving rival factions in the senate and the island’s most powerful trading partner. And it’s beginning to look as if the deaths of Hannah’s archaeologist parents shortly after her birth were very far from accidental. Soon the race is on for Hannah and her friends to unravel a chain of hidden riddles and follow them back to their source to save not just her own life, but her island home itself.

Author: Stephen Hunt
Format: Other Format
Release Date: 04/02/2010
ISBN: 978-0-00-730171-3
Stephen Hunt has worked as a writer, editor and publisher for a number of magazines and national newspaper groups in the UK. He is also the founder of www.SFcrowsnest.com, one of the oldest and most popular fan-run science fiction and fantasy websites. Born in Canada, the author divides his time between the UK, North America and Spain. His interests include computer programming, the graphic arts and collecting comics. One day he hopes to have a library large enough to house all of his books.

Secrets of the Fire Sea

A tale of high adventure and derring-do set in the same Victorian-style world as the acclaimed The Court of the Air and The Rise of the Iron Moon.