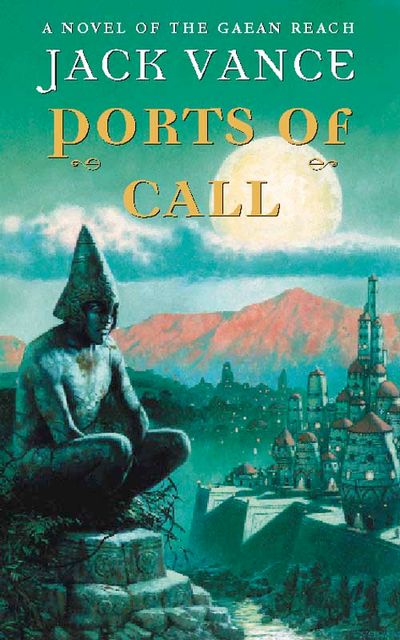 Sf grand master Vance’s latest is a tongue-in-cheek swashbuckler about a young man, Myron Tany, who has taken a degree in space studies but has much to learn when he first boards a ship. Myron is in thrall to his zany aunt, who has heard of a faraway fountain of youth and sets off in her space yacht to find it. Her captain flatters her agreeably, and when Myron points out that the man is a swindler, she won’t hear of it and maroons poor Myron on an inhospitable planet with barely his passage home.

Luckily, the tramp cargo vessel Glicca is just then in need of a supercargo, and Myron signs on with cool, competent Captain Maloof, Chief Engineer/gamblerSchwatzendale, and Chief Steward/photographer Wingo. The four enjoy a string of rare adventures on a spectacular series of planets.

They acquire as passengers a group of pilgrims (and their mysterious luggage), or rather, pirates masquerading as religious pilgrims, and engage in to-the-death struggles with the pirates’ pursuers; on Terce, Myron narrowly avoids being skinned (there is a flourishing trade in human skins) and eaten.

Finally, they encounter a Swiftian, legalistic planet on which one may be punished or betrothed for the slightest whimsical offense. Myron is bound to commit one…

Author: Jack Vance
Format: Paperback
Release Date: 15/02/1999
Pages: 400
ISBN: 978-0-00-648212-3
The author was born in 1916 and educated at the University of California, first as a mining engineer, then majoring in physics and finally in journalism. During the 1940s and 1950s, he contributed widely to sf and fantasy magazines. His first novel, The Dying Earth, was published in 1950 to great acclaim. Since then he has won both of sf’s most coveted trophies, the Hugo and Nebula awards; he has also won an Edgar Award for his mystery novel The Man in the Cage. He lives in California in a house he designed.