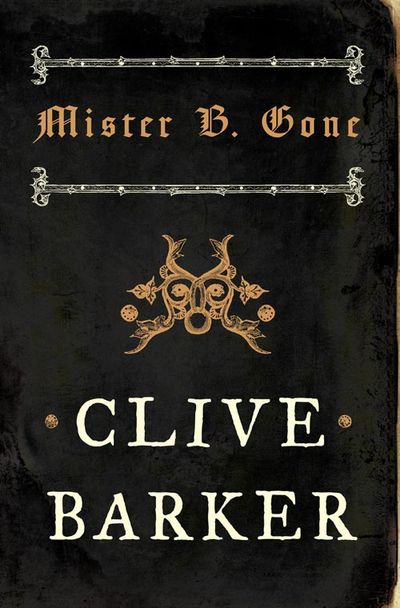 The long-awaited return of the great master of horror. Mister B. Gone is Barker’s shockingly bone-chilling discovery of a never-before-published demonic ‘memoir’ penned in the year 1438, when it was printed – one copy only – and then buried until now by an assistant who worked for the inventor of the printing press, Johannes Gutenberg.

This bone-chilling novel, in which a medieval devil speaks directly to his reader—his tone murderous one moment, seductive the next—is a never-before-published memoir allegedly penned in the year 1438.

The demon has embedded himself in the very words of this tale of terror, turning the book itself into a dangerous object, laced with menace only too ready to break free and exert its power.

A brilliant and truly unsettling tour de force of the supernatural, Mister B. Gone escorts the reader on an intimate and revelatory journey to uncover the shocking truth of the battle between Good and Evil.

Author: Clive Barker
Format: Paperback
Release Date: 01/10/2008
Pages: 240
ISBN: 978-0-00-727628-8
Clive Barker was born in Liverpool in 1952. His earlier books include The Books of Blood, Cabal, and The Hellbound Heart. In addition to his work as a novelist and playwright, he also illustrates, writes, directs and produces for stage and screen. His films include Hellraiser, Hellbound, Nightbreed and Candyman. Clive lives in Beverly Hills, California

The long-awaited return of the great master of horror. Mister B. Gone is Barker's shockingly bone-chilling discovery of a never-before-published demonic ‘memoir’ penned in the year 1438, when it was printed – one copy only – and then buried until now by an assistant who worked for the inventor of the printing press, Johannes Gutenberg.