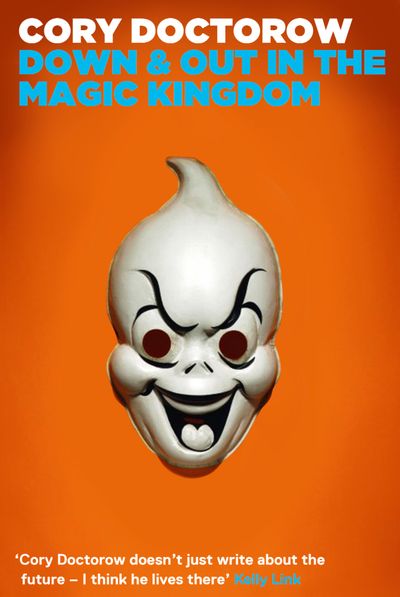 Down and Out in the Magic Kingdom

The prophetic debut novel from the visionary author fo LITTLE BROTHER, now published for the first time in the UK.

Jules is a young man barely a century old. He’s lived long enough to see the cure for death and the end of scarcity, to learn ten languages and compose three symphonies … and to realize his boyhood dream of taking up residence in Disney World.

Disney World! The greatest artistic achievement of the long-ago twentieth century. Now overseen by a network of ‘ad hocs’ who keep the classic attractions running as they always have, enhanced with only the smallest high-tech touches.

But the ad hocs are under attack. A new group has taken over the Hall of Presidents and is replacing its venerable audioanimatronics with new, immersive direct-to-brain interfaces that give guests the illusion of being Washington, Lincoln and all the others. For Jules, this is an attack on the artistic purity of Disney World itself.

Worse: it appears that this new group has had Jules killed. This upsets him. (It’s only his fourth death and revival after all.) Now it’s war.

Author: Cory Doctorow
Format: Other Format
Release Date: 31/01/2013
ISBN: 978-0-00-750601-9
Canadian-born Cory Doctorow is the author of the New York Times bestselling novel Little Brother. He has won the Locus Award for his fiction three times, been nominated for both the Hugo and the Nebula, and is the only author to have won both the John W. Campbell Award for Best New Writer and the Campbell Award for best SF Novel of the Year. He is the co-editor of BoingBoing.net, writes columns for Make, Information Week, the Guardian online and Locus and has been named one of the internet's top 25 influencers by Forbes magazine and a Young Global Leader by the World Economic Forum. Cory Doctorow lives in London with his wife and daughter.

Down and Out in the Magic Kingdom

The prophetic debut novel from the visionary author fo LITTLE BROTHER, now published for the first time in the UK.