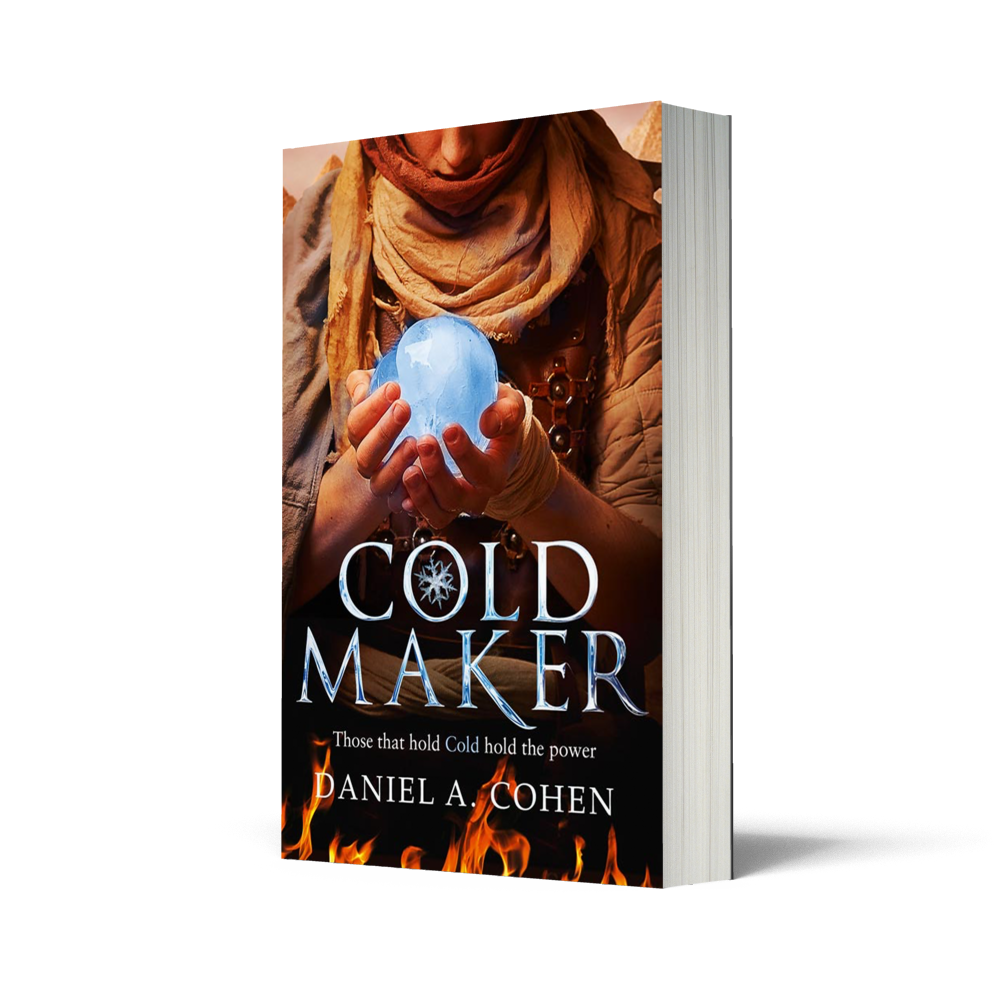 The inspiration for Coldmaker by Daniel A. Cohen

First and foremost, I very much wanted to explore a societal structure where the currency had a high inherent value, instead of just an assumed value.

Basically I wanted to explore the barter system on steroids.

I wanted the reader to feel the need for a particular currency, which in this world happens to be Cold itself, coming in five varying denominations (from least to most potent: Wisps, Drafts, Shivers, Chills, and the most holy of all, the Frost).

Even though the cold/hot trope has been widely explored, I’ve always found the idea of barren landscape to be simultaneously poetic and devastating. How do native peoples, desert travelers, and vagabonds survive in such harsh conditions? It takes a certain level of ingenuity (enter MICAH, the inventor protagonist of COLDMAKER) and a driving sense of survival in order to carry on. I figured a land as hot and barren as they come would give me the perfect set-up for this kind of desperate world, making Cold itself the currency, which automatically bestows that inherent value.

And there’s only one way to survive.

The second desire I wished to explore came from my intense interest in the power of lies. As much as we don’t want to believe it, people lie. Why people lie is up to much scientific and theological research and debate (all of which is way above my pay grade) but the simple fact is that for some reason, humans are built with this mechanism with which to escape the truth.

Some people lie a lot.

Some people believe their lies so much that they aren’t even part of the lying process any longer.

These lies can be something small and inoffensive (“No honey, fluorescent lights are going to look great in our living room.”) something middling (“He attacked me first!”) or something grand enough to change the course of society (no example here, for avoidance of hate mail and trolls, but we all know what I mean). And a lot times, these lies aren’t questioned for multiple reasons, and are left to fester and breed.

Life is perception, and I’ve always found the very nature of a lie to be fascinating. Unbeknownst to someone, a simple lie could very easily become their perceived truth. And as we all know, truth holds power. Truth grows. Truth matures. Truth builds upon itself. Shared truths can both raise and raze civilizations.

Which means lies can too.

As I older I’ve beginning to see how complex the world is, and how often our truths are dissolved and tossed away. For me, curiosity over lies was an important itch I needed to scratch, and scratch I did.

Without going into too much detail and spoiling anything, COLDMAKER is about one of those big lies. One of those lies that has grown so wildly out of hand over time that its legs are becoming weak, that its distended belly is threatening to make the whole thing topple over and come apart at the seams. It is about a lie that has been holed up in the darkness of the past for so long that its claws, teeth, and skin have pretty much become a part of the landscape, and it will not yield without ripping up the very earth beneath society’s feet.

I don’t pretend to be an expert on either of those two desires I mentioned earlier, but I have certainly learned a lot in the pursuit of their truths. It took five arduous years of tenacity and sacrifice to produce COLDMAKER in its finality, going through dozens of drafts and hundreds upon hundreds of scrapped pages, and through it all I learned not only about the World Cried, but about myself as well.

If you choose to pick up the book, I hope you enjoy the journey.

COLDMAKER by Daniel A. Cohen is OUT NOW.

Eight hundred years ago, the Jadans angered the Crier. In punishment, the Crier took their Cold away, condemning them to a life of enslavement in a world bathed in heat. Or so the tale goes.