WARNING: THESE MAY GIVE YOU A SERIOUS CASE OF THE NIGHT TERRORS

It’s Halloween and time for us all to experience a few bumps in the night. For those of you who like a good horror yarn, here are our top 10 horror reads:

Malorie raises the children the only way she can: indoors. The doors are locked, the curtains are closed, mattresses are nailed over the windows. They are out there. She might let them in. The children sleep in the bedroom across the hall. Soon she will have to blindfold them. Today they must leave the house. Today they will risk everything. Josh Malerman’s debut novel Bird Box is a terrifying, Hitchcockesque psychological horror that is sure to stay with you long after reading. Experience the fear now on ebook, for a special Hallowe’en price of only £2.99 here.

2. At the Mountains of Madness. H.P. Lovecraft.

Gathered together in this volume are seven of his greatest works, including the three short novels, The Case of Charles Dexter Ward, At the Mountains of Madness and The Dream-Quest of Unknown Kadath. Timeless in their appeal, these classics of the sinister and the macabre hold the power to truly terrify. A major figure in twentieth-century supernatural fiction, H. P. Lovecraft produced works of enduring power. He has influenced the whole spectrum of those working in the horror genre, from Stephen King to the creators of hit TV show Buffy the Vampire Slayer. You can buy it here. 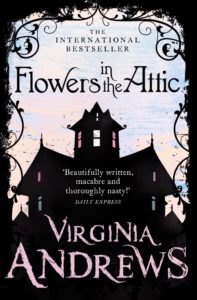 3. Flowers in the Attic. VC Andrews.

Chris, Cathy and the twins live perfect lives in such a happy, golden family but when their father dies suddenly the children are hidden in the airless attic. Their mother promises that they will stay only long enough to inherit her family’s fortune. But gradually she forgets how much she adored those children. Millions of readers have been enthralled by this gripping story of a family’s betrayal and heartbreak, love and revenge – which then sows the seeds for the future. Order your copy here.

In a quiet house on a quiet street Frank and Julia are having a very unusual affair. For Frank it began with a mysterious lacquered box- and then an unhinged voyage through a netherworld of imaginable pleasures and unimaginable horror… Now Frank- or what is left of Frank -waits in an empty room. All Julia can do is bring him her unfulfilled passions…and a little flesh and blood… Clive Barker is widely acknowledged as the master of nerve-shattering horror. The Hellbound Heart is one of his best, one of the most frightening stories you are likely to ever read. It was also the book behind the cult horror film, Hellraiser. Read it here and tremble.

Asakawa is a hardworking journalist, but when he starts to investigate the abrupt death of his seventeen-year-old niece he discovers that this strange simultaneous sudden-death syndrome also affected another three teenagers and that all of the teenagers are linked to a strange videotape. When he watches it, he finds a portentous message at the end: Those who have viewed these images are fated to die at this exact hour one week from now. Asakawa has only seven days to find the cause of the teenagers’ deaths before it finds him. A Stunning, cutting-edge thriller, and the inspiration for the film, The Ring, buy it here, if you dare.

The nightmare had begun…. Boone knew that there was no place on this earth for him now; no happiness here, not even with Lori. But Death itself seemed to shrink from Boone. No wonder, if he had indeed been the monster who had shattered, violated and shredded so many others’ lives. Boone’s only refuge now was Midian – that awful, legendary place in which gathered the half-dead, the Nightbreed…A fabulous journey through the mind of the master of dark imaginative fiction, Clive Barker, buy it here.

7. The Halloween Tree. Ray Bradbury. On Halloween night, eight trick-or-treaters gather at the haunted house by the edge of town, ready for adventure. But when Something whisks their friend Pip away, only one man – the sinister Carapace Clavicle Moundshroud – can help the boys find him. A classic tale of horror and adventure from the master of storytelling, Ray Bradbury. Recently relaunched in a beautiful new livery, check it out here.

9. From the Dust Returned. Ray Bradbury.

They have lived for centuries in a house of legend and mystery in upper Illinois – and they are not like other midwesterners. Rarely encountered in daylight hours, their children are curious and wild; and some sleep in beds with lids. Now the house is being readied in anticipation of the gala homecoming that will gather together the far-flung branches of this odd and remarkable family where they will mix their arcane skills and lifestyles, and change the world around them forever. Buy this incredible story by a master of horror here.

London, 1894. Juliet Moreau travels to a remote tropical island only to discover her father has created animals that have been vivisected to resemble, speak, and behave as humans. Worse, one of the creatures has turned violent and is killing the island’s inhabitants. As the island falls into chaos, she discovers the extent of her father’s genius—and madness—in her own blood. A gothic suspense novel inspired by HG Wells’ The Island of Dr Moreau. Get your copy here.