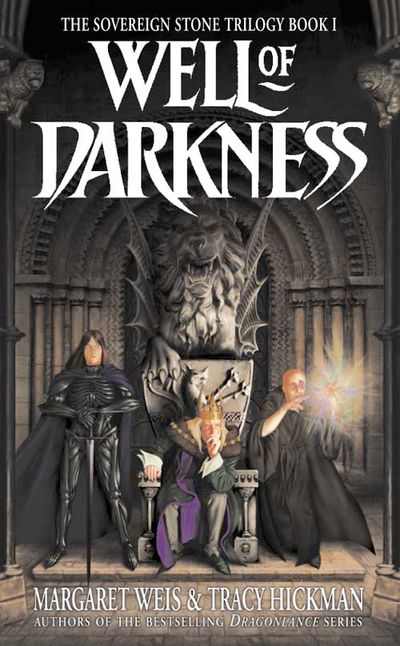 The first volume in the Sovereign Stone trilogy, a gripping fantasy series filled with unique characters, from the authors of the bestselling DRAGONLANCE books.

Gareth is just a frightened young lad when he is drafted in to be the whipping-boy for the unruly Prince Dagnarus. Yet as they grow to be men, an unshakable bond is formed. And it is their destiny for them to become the two most powerful – and feared – men in the kingdom.

But when Dagnarus decides to become a knight himself, he begins a chain of evil events that threaten to destroy the entire kingdom. Only by uniting the Sovereign Stone can peace be restored, and it is up to Dagnarus’ brother Helmos to try to achieve this impossible task, using his father’s soldiers against his brother’s army. All the while, Gareth is gaining mastery over the sinister Void magic, and he is devoted to helping his childhood companion..

This gripping story of magical power and corruption takes the unique viewpoint of focusing on the evil characters, as we follow them from boys to men. Filled with action, suspense and wonderfully imaginative characters, The Well of Darkness is set to elevate the careers of bestselling authors Weis & Hickman to spectacular new heights.

Author: Margaret Weis and Tracy Hickman
Format: Paperback
Release Date: 17/04/2001
Pages: 608
ISBN: 978-0-00-648614-5
Margaret Weis was born in 1948. She graduated from the University of Missouri in 1970 with a BA in Creative Writing and Literature. Following a career in publishing she became an editor withTSR in 1983, and now lives with her husband and two cats in a converted barn near Lake Genva, Wisconsin.Tracy Hickman, born in Salt Lake City in 1955. He worked as a supermarket boy, a movie projectionist, a theatre manager and a drill press operator, before landing a job with TSR. That job led to his association with Margaret Weis and the creation of the Dragon Lance Chronicles. He currently lives in Utah with his wife Laura and their four children.

The first volume in the Sovereign Stone trilogy, a gripping fantasy series filled with unique characters, from the authors of the bestselling DRAGONLANCE books.