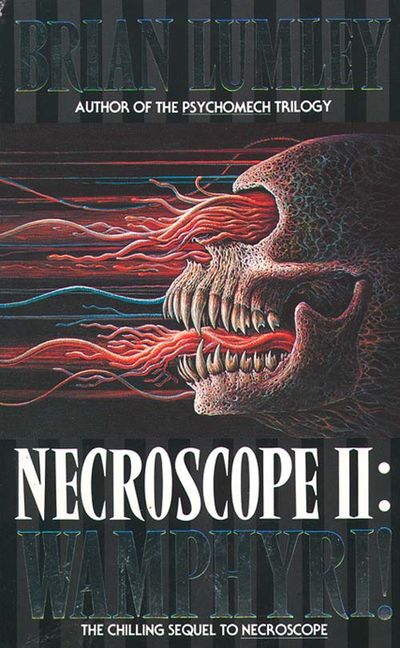 Only Harry Keogh, prisoner of the metaphysical Mobius Continuum, can stop the vampire Yulian Bodescu. Harry Keogh is a necroscope – he knows the thoughts of corpses in their graves. Unfortunately for Harry, his talent works both ways.

In a secluded English village, Yulian Bodescu plots his takeover of the world. Imbued with a vampire’s powers before his birth, Bodescu rules men’s minds and bodies with supernatural ease. He is secretly creating an army of vampiric monsters, things that once were men but were now walking masses of destructive hunger!

Harry Keogh, Necroscope, thought that the war with the vampires had ended with the destruction of Boris Dragosani – and of Harry’s body! But the man who talks to the dead lives on, more powerful than ever, able to transport himself instantly to any spot on the globe and to speak mind-to-mind with both the living and the dead.

Are Harry’s new powers enough to defeat Yulian Bodescu and his legion of monsters–or will the vampire army overrun the living earth?

Author: Brian Lumley
Format: Paperback
Release Date: 23/06/1998
Pages: 496
ISBN: 978-0-586-20000-1
Brian Lumley is the author of the bestselling Necroscope series of vampire novels. An acknowledged master of Lovecraft-style horror, Brian Lumley has won the British Fantasy Award and been named a Grand Master of Horror. His works have been published in more than a dozen countries and have inspired comic books, role-playing games, and sculpture, and been adapted for television.When not writing, Lumley can often be found spear-fishing in the Greek islands, gambling in Las Vegas, or attending a convention somewhere in the US. Lumley and his wife live in England.

Only Harry Keogh, prisoner of the metaphysical Mobius Continuum, can stop the vampire Yulian Bodescu. Harry Keogh is a necroscope – he knows the thoughts of corpses in their graves. Unfortunately for Harry, his talent works both ways.