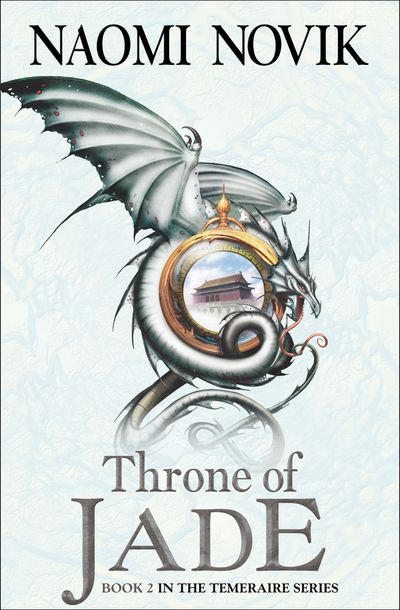 History takes flight in the second book of Naomi Novik’s deliciously addictive series which captures the Napoleonic period perfectly and skillfully layers the timeline with imagination by adding a Dragon Air Force to the battle for England.

Captain William Laurence of the British Air Corps and his dragon, Temeraire, begin their slow voyage to China, fearful that upon landing they will be forced to part by Imperial decree.

Temeraire is a Celestial dragon, the most highly-prized of all draconic breeds; famed for their intelligence, agility and most of all for the Divine Wind – their terrible roar capable of shattering the heavy timbers of war ships, shattering woodland and destroying other dragons mid-flight. Temeraire’s egg was captured and claimed by the British at sea, but he was meant to be the companion of the Emperor Napoleon and not captained by a mere officer in the British Air Corps.

The Chinese have demanded his return and the British cannot refuse them – they cannot afford to provoke the asian super-power into allying themselves with the French – even if it costs them the most powerful weapon in their arsenal and inflicts the most unimaginable pain upon Laurence and his dragon.

Author: Naomi Novik
Format: Other Format
Release Date: 20/02/2009
ISBN: 978-0-00-731857-5
Naomi Novik was born in New York in 1973, a first-generation American, and raised on Polish fairy tales, Baba Yaga, and Tolkien. She studied English Literature at Brown University and did graduate work in Computer Science at Columbia University before leaving to participate in the design and development of the computer game Neverwinter Nights: Shadows of Undrentide. Over the course of a brief winter sojourn working on the game in Edmonton, Canada (accompanied by a truly alarming coat that now lives brooding in the depths of her closet), she realized she preferred the writing to the programming, and, on returning to New York, decided to try her hand at novels. Temeraire is her first.Naomi lives in New York City with her husband and six computers. Her website and livejournal are at www.temeraire.org

History takes flight in the second book of Naomi Novik’s deliciously addictive series which captures the Napoleonic period perfectly and skillfully layers the timeline with imagination by adding a Dragon Air Force to the battle for England.