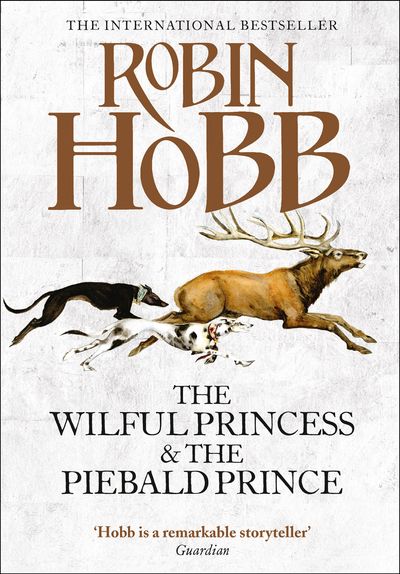 One of the darkest legends in the Realm of the Elderlings recounts the tale of the so-called Piebald Prince, a Witted pretender to the throne unseated by the actions of brave nobles so that the Farseer line could continue untainted. Now the truth behind the story is revealed through the account of Felicity, a low-born companion of the Princess Caution at Buckkeep.

With Felicity by her side, Caution grows into a headstrong Queen-in-Waiting. But when Caution gives birth to a bastard son who shares the piebald markings of his father’s horse, Felicity is the one who raises him. And as the prince comes to power, political intrigue sparks dangerous whispers about the Wit that will change the kingdom forever…

Internationally-bestselling, critically-acclaimed author Robin Hobb takes readers deep into the history behind the Farseer series in this exclusive, new novella, ‘The Willful Princess and the Piebald Prince.’ In her trademark style, Hobb offers a revealing exploration of a family secret still reverberating generations later when assassin FitzChivalry Farseer comes onto the scene. Fans will not want to miss these tantalizing new insights into a much-beloved world and its unforgettable characters.

Author: Robin Hobb
Format: Hardback
Release Date: 24/10/2013
Pages: 160
ISBN: 978-0-00-749813-0
Robin Hobb is one of the world’s finest writers of epic fiction.She was born in California in 1952 but raised in Alaska, where she learned how to raise a wolf cub, to skin a moose and to survive in the wilderness. When she married a fisherman who fished herring and the Kodiak salmon-run for half the year, these skills would stand her in good stead. She raised her family, ran a smallholding, delivered post to her remote community, all at the same time as writing stories and novels. She succeeded on all fronts, raising four children and becoming an internationally best-selling writer. She lives in Tacoma, Washington State.