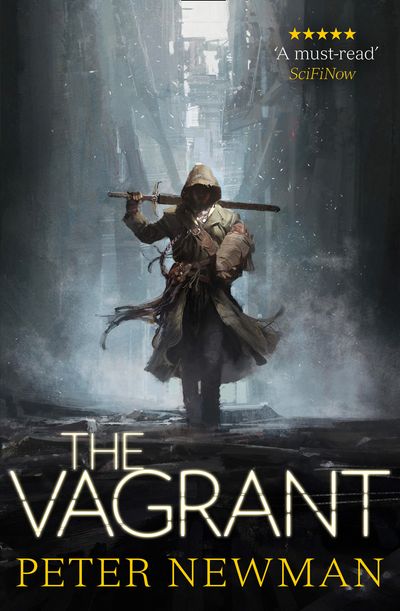 The Vagrant is his name. He has no other.

Years have passed since humanity’s destruction emerged from the Breach.

Friendless and alone he walks across a desolate, war-torn landscape.

As each day passes the world tumbles further into depravity, bent and twisted by the new order, corrupted by the Usurper, the enemy, and his infernal horde.

His purpose is to reach the Shining City, last bastion of the human race, and deliver the only weapon that may make a difference in the ongoing war.

What little hope remains is dying. Abandoned by its leader, The Seven, and its heroes, The Seraph Knights, the last defences of a once great civilisation are crumbling into dust.

But the Shining City is far away and the world is a very dangerous place.

Author: Peter Newman
Format: Paperback
Release Date: 25/02/2016
Pages: 416
ISBN: 978-0-00-759313-2
PETER NEWMAN is the author of the critically acclaimed, award-winning Vagrant Trilogy: The Vagrant, The Malice, The Seven. He sometimes pretends to be a butler for the Tea and Jeopardy podcast, which he co-writes and for which he won a Hugo Award in 2017. His first book, The Vagrant, won the David Gemmell Morningstar Award in 2016 for best Fantasy Debut of the Year. Peter writes for George R.R. Martin’s Wild Cards series and will first appear in Knaves Over Queens. He has also written for the computer game Albion Online. He lives in Somerset with his wife and son.www.runpetewrite.comTwitter: @runpetewrite

The Vagrant is his name. He has no other.