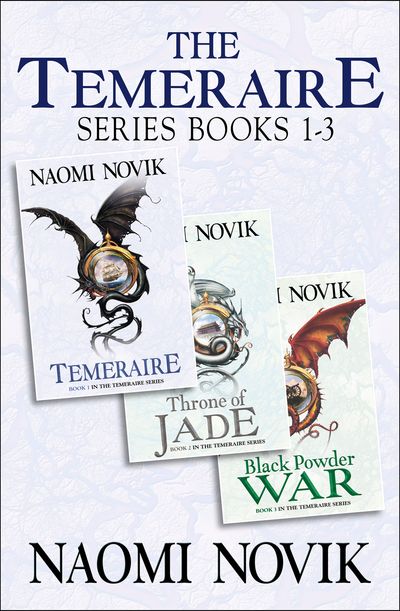 A collection of the first three novels in Naomi Novik’s stunning Temeraire series, following the global adventures of Captain William Laurence and his fighting dragon Temeraire as they are thrown together to fight for Britain during the Napoleonic Wars.

After a skirmish with a French ship, Captain William Laurence finds himself in charge of a rare cargo: a dragon egg bound for the Emperor Napoleon himself. Dragons are much prized: properly trained, they can mount a fearsome attack from the skies. Laurence must take the beast in hand and join the aviators’ cause, thus relinquishing all hope of a normal life.

The dragon, Temeraire, was meant to be the companion of the Emperor Napoleon and not captained by a mere officer in the British Air Corps. The Chinese have demanded his return and the British government cannot afford to provoke the Asian superpower into allying with the French – even if it costs them the most powerful weapon in their arsenal, and forces Laurence and Temeraire apart forever.

British flyer Will Laurence and his extraordinary dragon, Temeraire, gratefully anticipate their voyage home from China. But before they set sail, they are waylaid by urgent new orders: the British Government, having purchased three valuable dragon eggs from the Ottoman Empire, now require Laurence and Temeraire to make a more perilous overland journey instead, stopping off in Istanbul to collect and escort the precious cargo back to England.

A collection of the first three novels in Naomi Novik’s stunning Temeraire series, following the global adventures of Captain William Laurence and his fighting dragon Temeraire as they are thrown together to fight for Britain during the Napoleonic Wars.