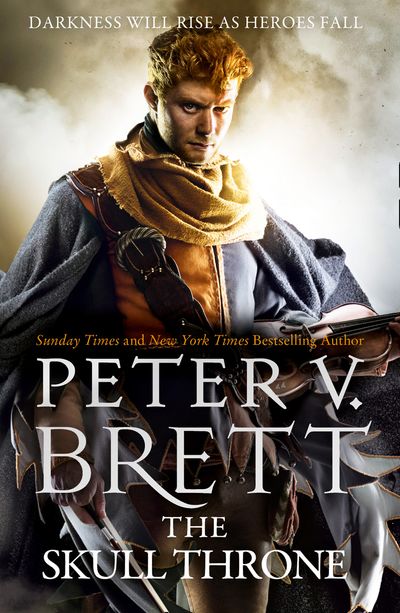 Built from the skulls of fallen generals and demon princes, the Skull Throne of Krasia is a seat of honour and powerful magic that keeps the demon corelings at bay.

From atop it, Ahmann Jardir was meant to conquer the known world, forging a unified army to end the demon war once and for all.

Arlen Bales, the Painted Man, stood against this course, challenging Jardir to a duel to the death. Rather than risk defeat, Arlen cast Jardir and himself from a precipice, opening a struggle for succession that threatens to tear the Free Cities of Thesa apart.

Renna Bales may know the fate of Arlen and Jadir, but she, too, has disappeared. Now Jardir’s sons clash to claim the throne, and risk a civil war among their people. Leesha Paper and Rojer Inn struggle to unite the duchies of Angiers and Miln against the Krasians.

Caught in the crossfire, the rich and unprotected duchy of Lakton sits ripe for conquest. All the while, the corelings have grown stronger—and without Arlen and Jardir, none may be able to stop them.

Author: Peter V. Brett
Format: Paperback
Release Date: 28/01/2016
Pages: 768
ISBN: 978-0-00-742569-3
Peter V. Brett is the internationally bestselling author of the Demon Cycle series, which has sold over two million copies in twenty-five languages worldwide. Novels include The Painted Man, The Desert Spear, The Daylight War, The Skull Throne, and The Core. He spends too much time on the Internet but occasionally unplugs to practice kickboxing and dad fu. He lives in Manhattan.