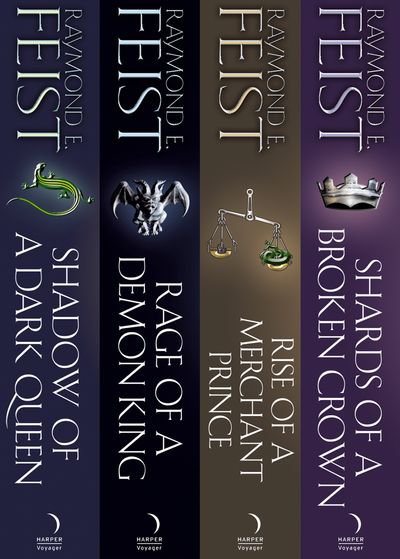 Return to a world of magic and adventure from best selling author Raymond E. Feist. This bundle includes the complete Serpentwar Saga.

Return to the world of Midkemia…

Ancient powers are readying themselves for a devastating confrontation, and a dark queen has raised a standard and is gathering armies of unmatched might.

Into this battleground of good and evil a band of desperate men are forced whose only hope for survival is to face this ancient power and discover its true nature. Their quest is at best dangerous and at worst suicidal.

Among them are some unlikely heroes – Erik, a bastard heir denied his birthright, and his friend Roo, an irrepressible scoundrel with a penchant for thievery are accompanied by the mysterious Miranda upon whom all must wager their lives. She appears to be an ally but also possess a hidden agenda and may prove to be a more deadly foe when the final confrontation is at hand…

Author: Raymond E. Feist
Format: Other Format
Release Date: 14/03/2013
ISBN: 978-0-00-751875-3
Feist is one of the world’s leading fantasy writers. His Riftwar and Serpentwar Sagas have been global bestsellers for years.Born and raised in Southern California, Raymond E. Feist was educated at the University of California, San Diego, where he graduated with honours in Communication Arts. He is the author of the bestselling and critically acclaimed Riftwar Saga.

Return to a world of magic and adventure from best selling author Raymond E. Feist. This bundle includes the complete Serpentwar Saga.