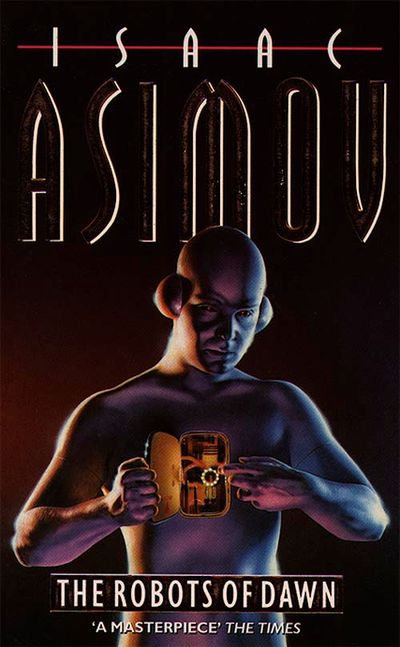 Called to the Spacer world to solve a case of roboticide, New York City detective Elijah Baley teams up with humanoid robot R. Daneel Olivaw. Together they are tasked with proving that the prime suspect, a renowned roboticist, is innocent of the crime.

Plain clothes man Elijah Baley must travel to the planet Aurora to investigate the murder of Robot Jander. He would rather not. His last trip off-Earth on police business resulted in a TV drama being made of the case – as a result of which even his son Bentley suspects Elijah had an affair with Gladia Delmarre, the murder suspect whom he proved innocent. Not only does Gladia now live on Aurora, the murdered robot belonged to her…and was her lover!

Elijah is teamed once more with Robot Daneel, and they are joined by another interesting robot, Giskard. The investigation should benefit from a secret and unique ability possessed by Robot Giskard. But Elijah is disturbed by his presence, sensing perhaps that Giskard’s positronic brainpaths function to a hidden agenda. What Giskard knows but Elijah does not is that the future of mankind in space hangs on the outcome of this investigation…

Author: Isaac Asimov
Format: Paperback
Release Date: 10/01/1994
Pages: 480
ISBN: 978-0-586-06199-2
Isaac Asimov, world maestro of science fiction, was born in Russia near Smolensk in 1920 and was brought to the United States by his parents three years later. He grew up in Brooklyn where he went to grammar school and at the age of eight he gained his citizen papers. A remarkable memory helped him finish high school before he was sixteen. He then went on to Columbia University and resolved to become a chemist rather than follow the medical career his father had in mind for him. He graduated in chemistry and after a short spell in the Army he gained his doctorate in 1949 and qualified as an instructor in biochemistry at Boston University School of Medicine where he became Associate Professor in 1955, doing research in nucleic acid. Increasingly, however, the pressures of chemical research conflicted with his aspirations in the literary field, and in 1958 he retired to full-time authorship while retaining his connection with the University.Asimov’s fantastic career as a science fiction writer began in 1939 with the appearance of a short story, ‘Marooned Off Vesta’, in Amazing Stories. Thereafter he became a regular contributor to the leading SF magazines of the day including Astounding, Astonishing Stories, Super Science Stories and Galaxy. He won the Hugo Award four times and the Nebula Award once. With nearly five hundred books to his credit and several hundred articles, Asimov’s output was prolific by any standards. Apart from his many world-famous science fiction works, Asimov also wrote highly successful detective mystery stories, a four-volume History of North America, a two-volume Guide to the Bible, a biographical dictionary, encyclopaedias, textbooks and an impressive list of books on many aspects of science, as well as two volumes of autobiography.Isaac Asimov died in 1992 at the age of 72.

Called to the Spacer world to solve a case of roboticide, New York City detective Elijah Baley teams up with humanoid robot R. Daneel Olivaw. Together they are tasked with proving that the prime suspect, a renowned roboticist, is innocent of the crime.