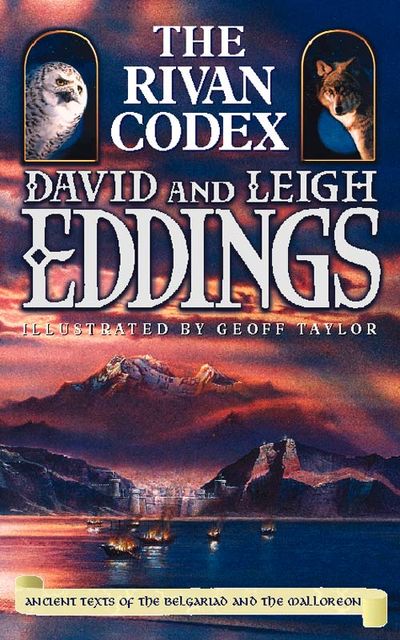 Comprising the ancient texts of The Belgariad and The Malloreon, The Rivan Codex is a book which stands in the same relationship to the Belgariad and Malloreon as The Silmarillion does to The Lord of the Rings and The Hobbit.

Before David Eddings started to write his first fantasy series, the BELGARIAD, in the late 1970s, he spent a year working on the design and mythology of the fantasy world in which it is set.

The Rivan Codex comprises the immensely readable background material to Eddings’ best-loved series, repeated information a lot of it, but it’s the books that repeat the information, and these seminal documents have about them an air of original inspiration, world-building in action. The rest of it is background which is taken for granted but not spelled out.

History, geography, myths and folktales, peoples, gods, customs, social organization, political hierarchy, laws, dress, modes of address, produce, culture, flora, fauna, all presented with so light a touch one can only yearn for Eddings to be taken up by academics so that his style might catch on in the real real world.

The 12-book long series grew out of these delightful preliminary sketches like a river growing from a spring of striking purity and constancy. Magically, the information reads fresh each time, minimal Eddings prose, beguilingly arcane, in which massive events attain an all-time perspective.

Author: David Eddings and Leigh Eddings
Format: Other Format
Release Date: 01/07/2010
ISBN: 978-0-00-739386-2
David Eddings was born in Washington State in 1931 and grew up near Seattle. He graduated from the University of Washington and went on to serve in the US Army. Subsequently he worked as a buyer for the Boeing company and taught college-level English. His first novel was a contemporary adventure, but he soon began a spectacular career as a fantasy writer with his bestselling series The Belgariad.

Comprising the ancient texts of The Belgariad and The Malloreon, The Rivan Codex is a book which stands in the same relationship to the Belgariad and Malloreon as The Silmarillion does to The Lord of the Rings and The Hobbit.