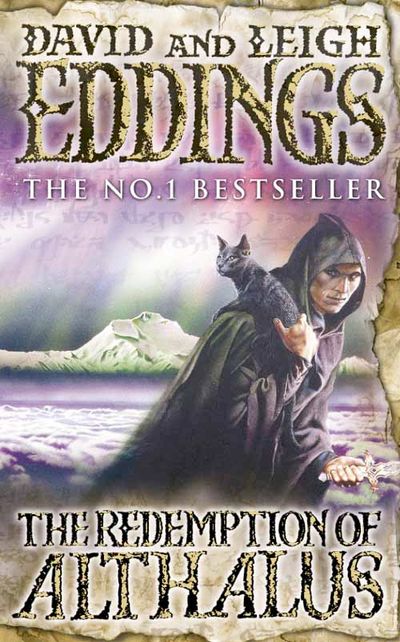 The Redemption of Althalus

Burglar, armed robber and sometime murderer, our hero Althalus is commissioned to steal a book from the House at the End of the World by a mysterious cloaked stranger named Ghend.At the House at the End of the World, he finds a talking cat… in the same room as the book Ghend described. What he can’t find once he’s in the house is the door by which he entered. Only 2467 years and an ice age later does Althalus re-emerge with the cat, Emmy. He’s read the book written by the god Deiwos, whose evil brother Daeva is trying to unmake the world. Emmy is in fact their sister and she’s setting out to save the world with Althalus to help her.No easy task. First there is a quest to unearth the magical knife that will enable Emmy to assemble her band of essential helpers: Eliar (young soldier), Andine (leader of a small country), Bheid (black-robed priest), Gher (ten-year old orphan), Leitha (telepath/witch).Battles follow against Gelta the Queen of Night and the armies of Daeva involving many devious manoeuvres in and out of the House where Doors can be opened to any place at any time. Daeva has his Doors, too. When Daeva can’t win through battle, he tries revolution. When Dweia (Emmy) can’t win any other way, Althalus will persuade her to lie, cheat and steal – reciprocating the lessons in truth, justice and morality Emmy has been giving him for some while.The existence of the world hangs in the balance and love cannot be guaranteed to triumph in this glorious epic fantasy.

Author: David Eddings and Leigh Eddings
Format: Paperback
Release Date: 02/07/2001
Pages: 928
ISBN: 978-0-00-651483-1
David Eddings was born in Washington State in 1931 and grew up near Seattle. He graduated from the University of Washington and went on to serve in the US Army. Subsequently, he worked as a buyer for the Boeing Aircraft Company and taught college-level English. His career as a fantasy writer, with his wife Leigh, has been spectacular.

The Redemption of Althalus