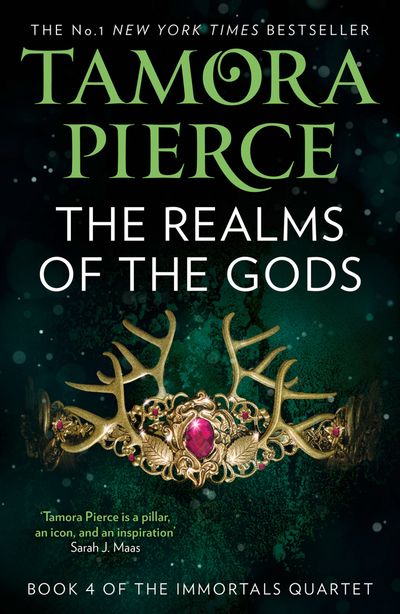 The Realms of the Gods

Discover a land of enchantment, legend, and adventure in this fourth and final book of The Immortals series, featuring an updated package – perfect for longtime fans and newcomers alike.

Daine holds the fate of Tortall in her hands in this thrilling conclusion to The Immortals series.

During a dire battle, Daine and her mentor Numair are swept into the Divine Realms – where gods and legends roam. Safe for now, they are desperately needed back in the land of mortals, where their old enemy, the Emperor Ozorne and his army of strange immortal creatures are waging war against Tortall.

Through her journey to the land of the gods, Daine comes upon incredible truths. But as the secrets of her past are revealed so is the treacherous way back to Tortall. And so Daine and Numair must embark on an extraordinary journey home.

The fate of all Tortall rests with Daine and her wild magic
Discover a land of enchantment, legend, and adventure in this fourth and final book of The Immortals series, featuring an updated cover for longtime fans and newcomers alike.

Author: Tamora Pierce
Format: Other Format
Release Date: 18/10/2018
ISBN: 978-0-00-830417-1
Tamora Pierce is the New York Times bestselling author of the The Song of the Lioness series, The Numair Chronicles, The Immortals series and The Protector of the Small quartet.Pierce was born in South Connellsville, Pennsylvania and her parents were originally going to call her ‘Tamara’, but the nurse who filled out her birth certificate had never heard of that name before and accidentally misspelled it.A passionate reader from an early age, devouring encyclopaedias, Dr Seuss books and J.R.R. Tolkien, writing helped Pierce get through her parents’ divorce. In her junior year at college, she sold her first story and went on to publish The Song of the Lioness in 1983: changing the landscape of fantasy fiction forever. An award-winning, multiple New York Times bestselling author whose books have been published all over the world, Pierce lives in New York with her husband.

The Realms of the Gods

Discover a land of enchantment, legend, and adventure in this fourth and final book of The Immortals series, featuring an updated package – perfect for longtime fans and newcomers alike.