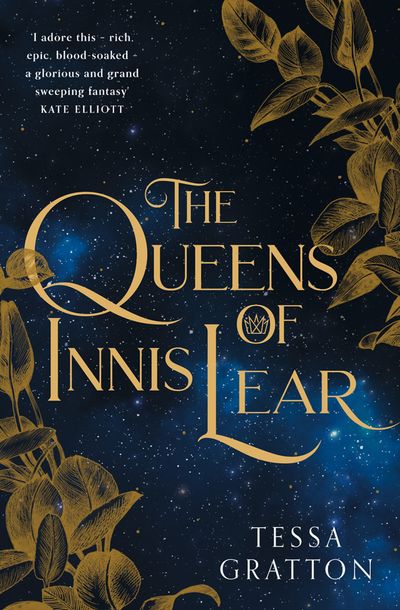 The Queens of Innis Lear

A KINGDOM AT RISK, A CROWN DIVIDED, A FAMILY DRENCHED IN BLOOD

Tessa Gratton’s debut epic adult fantasy, The Queens of Innis Lear, brings to life a world that hums with ancient magic, and characters as ruthless as the tides.

The erratic decisions of a prophecy-obsessed king have drained Innis Lear of its wild magic, leaving behind a trail of barren crops and despondent subjects. Enemy nations circle the once-bountiful isle, sensing its growing vulnerability, hungry to control the ideal port for all trade routes.

The king’s three daughters – battle-hungry Gaela, master manipulator Reagan, and restrained, starblessed Elia – know the realm’s only chance of resurrection is to crown a new sovereign, proving a strong hand can resurrect magic and defend itself. But their father will not choose an heir until the longest night of the year, when prophecies align and a poison ritual can be enacted.

Refusing to leave their future in the hands of blind faith, the daughters of Innis Lear prepare for war – but regardless of who wins the crown, the shores of Innis will weep the blood of a house divided.

Author: Tessa Gratton
Format: Other Format
Release Date: 27/03/2018
ISBN: 978-0-00-828189-2
Tessa Gratton has wanted to be a paleontologist or a wizard since she was seven. Alas, she turned out too impatient to hunt dinosaurs, but is still searching for a someone to teach her magic. After traveling the world with her military family, she acquired a BA (and the important parts of an MA) in Gender Studies, then settled down in Kansas with her partner, her cats, and her mutant dog. She now spends her days staring at the sky and telling lots of stories about magic.

The Queens of Innis Lear

A KINGDOM AT RISK, A CROWN DIVIDED, A FAMILY DRENCHED IN BLOOD