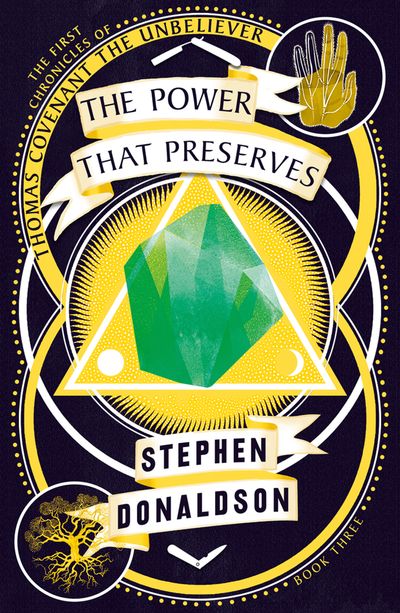 The Power That Preserves

The concluding volume in The Chronicles of Thomas Covenant, the Unbeliever, now part of the Voyager Classics collection.

Twice before Thomas Covenant had been summoned to the strange other-world where magic worked. Twice he had been forced to join with the Lords of Revelstone in their war against Lord Foul, the ancient enemy of the Land.

Now he is back – to a Land ravaged by the armies of Lord Foul. The Lords are besieged and helpless. No place is safe and Foul’s victory seems certain. Only Covenant can avert it.

Desperately and without hope, he sets out to confront the might of the Enemy. With him go a Giant, a Bloodguard and the madwoman he has wronged. And in Foul’s Creche, Lord Foul grows in power with each new defeat for the Land.

Author: Stephen Donaldson
Format: Paperback
Release Date: 17/06/2002
Pages: 576
ISBN: 978-0-00-712784-9
Stephen Donaldson was born in 1947 in Cleveland, Ohio. He graduated from the College of Wooster, Ohio in 1968 and went on to receive an MA in English from Kent State University after serving two years as a conscientious objector doing hospital work. He made his publishing debut in 1977 with The Chronicles of Thomas Covenant, the Unbeliever. This bestselling trilogy was named Best Novel of the Year by the British Fantasy Society and earned the author the John W. Campbell Award as best new writer in 1979. Stephen Donaldson lives in New Mexico.

The Power That Preserves

The concluding volume in The Chronicles of Thomas Covenant, the Unbeliever, now part of the Voyager Classics collection.