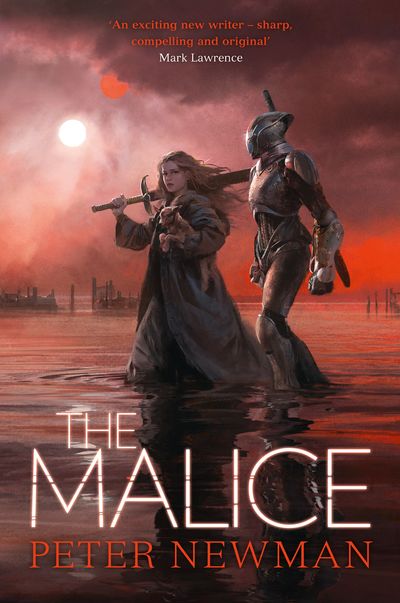 ‘The Malice was entertaining and riveting, with almost never a dull moment. …Do yourself a favour, buy this book. And the first one, too, if you don’t already own it. You will regret nothing.’ Geeks of Doom

In the south, the Breach stirs.

Gamma’s sword, the Malice, wakes, calling to be taken to battle once more.

But the Vagrant has found a home now, made a life and so he turns his back, ignoring its call.

The sword cries out, frustrated, until another answers.

Her name is Vesper.

Author: Peter Newman
Format: Hardback
Release Date: 19/05/2016
Pages: 464
ISBN: 978-0-00-759316-3
PETER NEWMAN is the author of the critically acclaimed, award-winning Vagrant Trilogy: The Vagrant, The Malice, The Seven. He sometimes pretends to be a butler for the Tea and Jeopardy podcast, which he co-writes and for which he won a Hugo Award in 2017. His first book, The Vagrant, won the David Gemmell Morningstar Award in 2016 for best Fantasy Debut of the Year. Peter writes for George R.R. Martin’s Wild Cards series and will first appear in Knaves Over Queens. He has also written for the computer game Albion Online. He lives in Somerset with his wife and son.www.runpetewrite.comTwitter: @runpetewrite

‘The Malice was entertaining and riveting, with almost never a dull moment. …Do yourself a favour, buy this book. And the first one, too, if you don’t already own it. You will regret nothing.’ Geeks of Doom