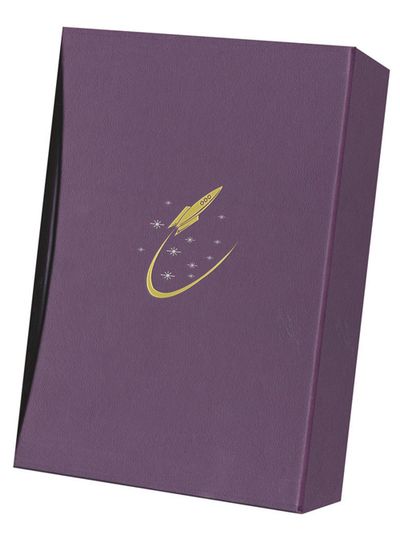 This deluxe illustrated edition features five exclusive full-colour paintings, a specially reset text and is housed in its own slipcase. Limited to just 500 copies, it is signed by Frederik Pohl, Brian Aldiss, who provides a foreword, and the artist, John Harris. Arthur C Clarke’s signature appears as a facsimile.

This deluxe quarterbound edition features five stunning colour plates by acclaimed artist, John Harris, which were specially commissioned for this edition, and a foreword by fellow SF grandmaster Brian Aldiss. The book features the fully reset and corrected text, is signed by all contributors (Arthur C Clarke’s signature appears in facsimile) and is limited to just 500 numbered copies; it is housed in a matching slipcase and will be a treasured addition to any collector’s library.

This deluxe illustrated edition features five exclusive full-colour paintings, a specially reset text and is housed in its own slipcase. Limited to just 500 copies, it is signed by Frederik Pohl, Brian Aldiss, who provides a foreword, and the artist, John Harris. Arthur C Clarke's signature appears as a facsimile.