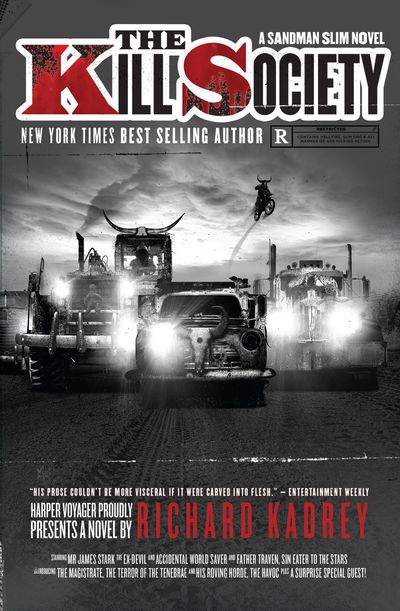 Ninth in the high-octane Sandman Slim series, The Kill Society has the kick-ass action and inventive fantasy that are the hallmarks of New York Times bestselling author Richard Kadrey.

Sandman Slim has reached the far edge of Tenebrae: the desolate home of the lost dead. Alone and with no clue how to get back home, he collides with a caravan of the damned, led by the ruthless Magistrate.

Slim didn’t land in Tenebrae by chance. When he tried to open Heaven, he sent a tsunami across the universe and now the afterlife is falling apart. The angels know Slim is close by, and they have put a tempting bounty on his head.

It’s one thing to ride with a ferocious criminal gang across the land of the dead – it’s quite another to do it while everyone is trying to make sure you stay there. But Slim’s not too worried. He’s been fighting cosmic forces hell-bent on destruction for years. A pack of vicious bounty hunters, vengeful angels, and dangerous enemies with friendly smiles isn’t going to stop him fixing the chaos he’s caused…

Author: Richard Kadrey
Format: Paperback
Release Date: 29/06/2017
Pages: 352
ISBN: 978-0-00-821906-2
Richard Kadrey is the New York Times bestselling author of the Sandman Slim supernatural noir books. Sandman Slim was included in Amazon’s ‘100 Science Fiction & Fantasy Books to Read in a Lifetime’, and is in development as a feature film. His other books include Hollywood Dead, The Everything Box, Metrophage, and Butcher Bird, and he also writes comics and screenplays. He lives in San Francisco.

Ninth in the high-octane Sandman Slim series, The Kill Society has the kick-ass action and inventive fantasy that are the hallmarks of New York Times bestselling author Richard Kadrey.