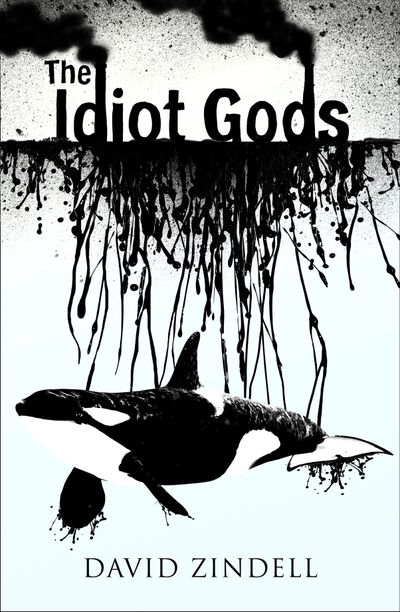 Quite simply the best book about a whale since Moby Dick.

The Idiot Gods is an epic tale told by an orca. David Zindell returns to the grand themes of Neverness in this uniquely moving book.

An epic tale of a quest for a new way of life on earth, told by an orca.

When Arjuna of the Blue Aria Family encounters three signs of cataclysm, he leaves his home in the Arctic Ocean to seek out the Idiot Gods and ask us why we are destroying the world. But the whales’ ancient Song of Life is beyond our understanding, and we know nothing of the Great Covenant between our kinds. Arjuna is captured, starved, tortured and made to do tricks in a tiny pool at Sea Circus.

His love for a human linguist gives him hope, even as he despairs that other people twist his words and continue the worldwide slaughter. As the whales’ beloved Ocean turns toward the Blood Solstice the fate of humanity hangs in the balance: for if Arjuna gains the Voice of Death he could destroy mankind. But if understanding can prevail, he may, through the whales’ mysterious power of quenging, create a new Song of Life and enable human evolution to unfold.

Author: David Zindell
Format: Hardback
Release Date: 13/07/2017
Pages: 480
ISBN: 978-0-00-725227-5
After majoring in, at various times, philosophy, anthropology, linguistics, and physics, David Zindell graduated from the University of Colorado with a degree in mathematics. He was nominated for a Hugo Award for best new writer, and his bestselling novel Neverness, a cosmic sf epic, was shortlisted for the Arthur C. Clark Award. A successor trilogy, A Requiem For Homo Sapiens, came next, followed by the four-book Ea Cycle, a Grail quest to end all Grail quests. David lives in Denver, Colorado and you can find out more about him at his website: www.davidzindell.com.

Quite simply the best book about a whale since Moby Dick.

The Idiot Gods is an epic tale told by an orca. David Zindell returns to the grand themes of Neverness in this uniquely moving book.