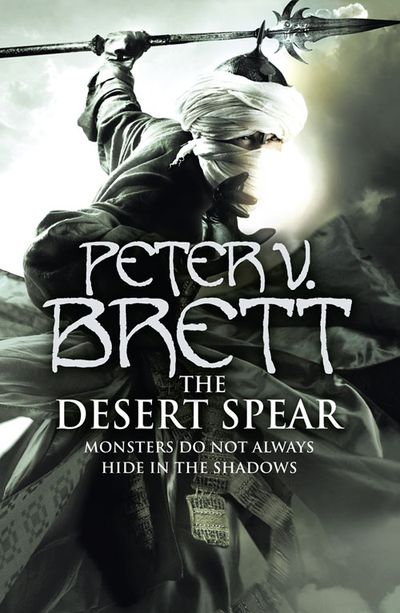 Continuing the impressive debut fantasy series from author Peter V. Brett, The Desert Spear is book two of the Demon Cycle, pulling the reader into a world of demons, darkness and heroes.

The Deliverer has returned, but who is he?

Arlen Bales, formerly of the small hamlet of Tibbet’s Brook, learnt harsh lessons about life as he grew up in a world where hungry demons stalk the night and humanity is trapped by its own fear. He chose a different path; chose to fight inherited apathy and the corelings, and eventually he became the Painted Man, a reluctant saviour.

But the figure emerging from the desert, calling himself the Deliverer, is not Arlen. He is a friend and betrayer, and though he carries the spear from the Deliverer’s tomb, he also heads a vast army intent on a holy war against the demon plague… and anyone else who stands in his way.

Author: Peter V. Brett
Format: Other Format
Release Date: 01/04/2010
ISBN: 978-0-00-730190-4
Peter V. Brett is the internationally bestselling author of the Demon Cycle series, which has sold over two million copies in twenty-five languages worldwide. Novels include The Painted Man, The Desert Spear, The Daylight War, The Skull Throne, and The Core. He spends too much time on the Internet but occasionally unplugs to practice kickboxing and dad fu. He lives in Manhattan.

Continuing the impressive debut fantasy series from author Peter V. Brett, The Desert Spear is book two of the Demon Cycle, pulling the reader into a world of demons, darkness and heroes.