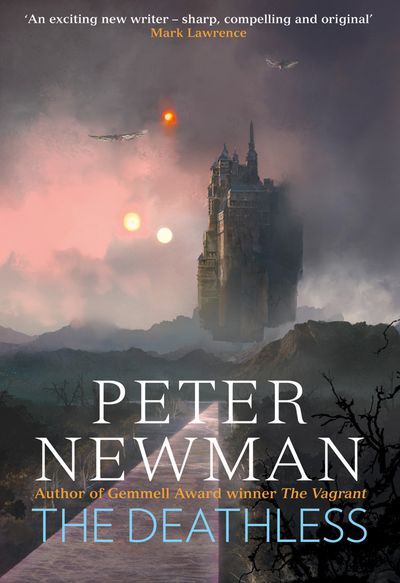 In the endless forests of the Wild, humanity scratches a living by the side of the great Godroads, paths of crystal that provide safe passage and hold back the infernal tide. Creatures lurk within the trees, watching, and plucking those who stray too far from safety.

In crystal castles held aloft on magical currents, seven timeless royal families reign, protecting humanity from the spread of the Wild and its demons. Born and reborn into flawless bodies, the Deathless are as immortal as the precious stones from which they take their names. For generations a fragile balance has held.

House Sapphire, one of the ancient Deathless families, is riven by suspicion and madness. Whole villages are disappearing as the hunting expeditions holding the Wild at bay begin to fail.

The Deathless is the first novel in an astonishing new series from Gemmell award-winning author Peter Newman.

Author: Peter Newman
Format: Hardback
Release Date: 14/06/2018
Pages: 448
ISBN: 978-0-00-822898-9
PETER NEWMAN is the author of the critically acclaimed, award-winning Vagrant Trilogy: The Vagrant, The Malice, The Seven. He sometimes pretends to be a butler for the Tea and Jeopardy podcast, which he co-writes and for which he won a Hugo Award in 2017. His first book, The Vagrant, won the David Gemmell Morningstar Award in 2016 for best Fantasy Debut of the Year. Peter writes for George R.R. Martin’s Wild Cards series and will first appear in Knaves Over Queens. He has also written for the computer game Albion Online. He lives in Somerset with his wife and son.www.runpetewrite.comTwitter: @runpetewrite