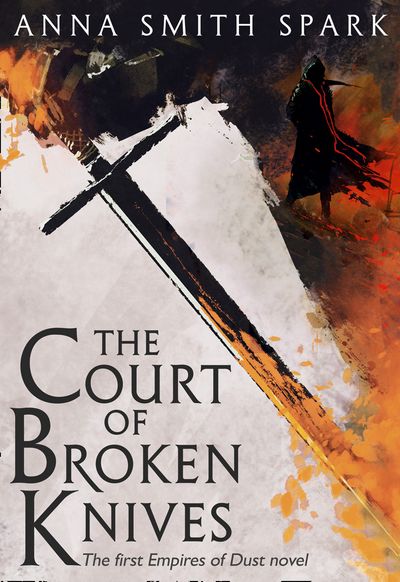 The Court of Broken Knives

Perfect for fans of Mark Lawrence and R Scott Bakker, The Court of Broken Knives is the explosive debut by one of grimdark fantasy’s most exciting new voices.

They’ve finally looked at the graveyard of our Empire with open eyes. They’re fools and madmen and like the art of war. And their children go hungry while we piss gold and jewels into the dust.

In the richest empire the world has ever known, the city of Sorlost has always stood, eternal and unconquered. But in a city of dreams governed by an imposturous Emperor, decadence has become the true ruler, and has blinded its inhabitants to their vulnerability. The empire is on the verge of invasion – and only one man can see it.

Haunted by dreams of the empire’s demise, Orhan Emmereth has decided to act. On his orders, a company of soldiers cross the desert to reach the city. Once they enter the Palace, they have one mission: kill the Emperor, then all those who remain. Only from ashes can a new empire be built.

The company is a group of good, ordinary soldiers, for whom this is a mission like any other. But the strange boy Marith who walks among them is no ordinary soldier. Marching on Sorlost, Marith thinks he is running away from the past which haunts him. But in the Golden City, his destiny awaits him – beautiful, bloody, and more terrible than anyone could have foreseen.

Author: Anna Smith Spark
Format: Other Format
Release Date: 29/06/2017
ISBN: 978-0-00-820417-4
ANNA SMITH SPARK lives in London, UK. She has a BA in Classics, an MA in History and a PhD in English Literature.Besides her fantasy novels, she has been published in the Fortean Times, Hansard and the poetry website www.greatworks.org.Previous jobs include fetish model, English teacher and petty bureaucrat.Anna can often be spotted at SFF conventions wearing very unusual shoes.

The Court of Broken Knives

Perfect for fans of Mark Lawrence and R Scott Bakker, The Court of Broken Knives is the explosive debut by one of grimdark fantasy’s most exciting new voices.