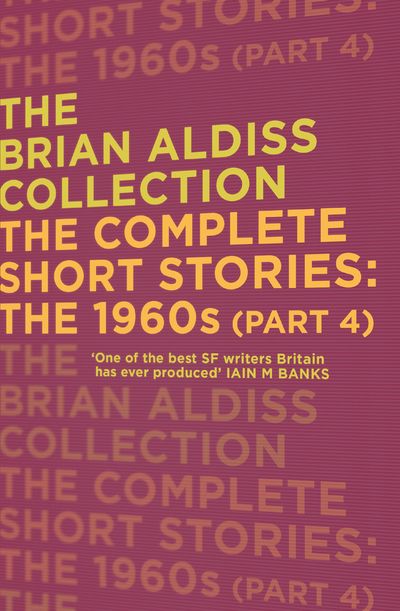 Following on from the 1950s collection, this is the second collection of Brian Aldiss’ short stories, taken from the 1960s. A must-have for collectors. Part four of four.

This collection gathers together, for the very first time, Brian Aldiss’ complete catalogue of short stories from the 1960s, in four parts.

Taken from diverse and often rare sources, the works in this collection chart the blossoming career of one of Britain’s most beloved authors. From the first robot to commit suicide to the tale of a little boy who finds more companionship from his robot Teddy than from his parents – a story which was the literary basis for the first act of Steven Spielberg’s blockbuster feature film A.I. ARTIFICIAL INTELLIGENCE. This book proves once again that Aldiss’ gifted prose and unparalleled imagination never fail to challenge and delight.The four books of the 1960s short story collection are must-have volumes for all Aldiss fans, and an excellent introduction to the work of a true master.

THE BRIAN ALDISS COLLECTION INCLUDES OVER 50 BOOKS AND SPANS THE AUTHOR’S ENTIRE CAREER, FROM HIS DEBUT IN 1955 TO HIS MORE RECENT WORK.

Author: Brian Aldiss
Format: Paperback
Release Date: 24/09/2015
Pages: 620
ISBN: 978-0-00-814896-6
Brian Aldiss, OBE, is a fiction and science fiction writer, poet, playwright, critic, memoirist and artist. He was born in Norfolk in 1925. After leaving the army, Aldiss worked as a bookseller, which provided the setting for his first book, THE BRIGHTFOUNT DIARIES (1955). His first published science fiction work was the story ‘Criminal Record’, which appeared in Science Fantasy in 1954. Since then he has written nearly 100 books and over 300 short stories.

Following on from the 1950s collection, this is the second collection of Brian Aldiss’ short stories, taken from the 1960s. A must-have for collectors. Part four of four.