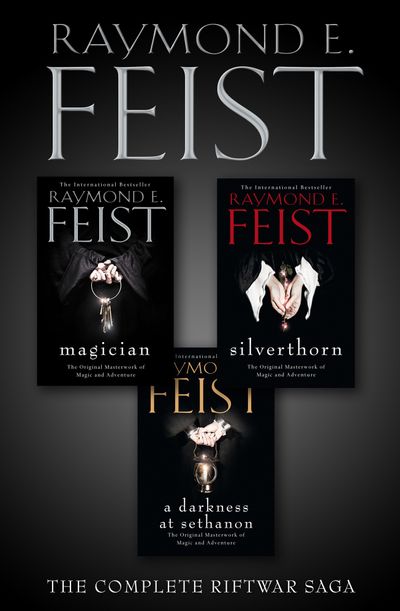 This ebook contains the entire trilogy The Riftwar Saga by bestselling author Raymond E. Feist, master of magic and adventure.

The ebook includes Magician, Silverthorn and A Darkness at Sethanon.

At Crydee, a frontier outpost in the tranquil Kingdom of the Isles, an orphan boy, Pug, is apprenticed to a master Magician – and the destinies of two worlds are changed forever.

Suddenly the peace of the Kingdom is destroyed as mysterious alien invaders swarm the land. Pug is swept up into the conflict but for him and his warrior friend, Tomas, an odyssey into the unknown has only just begun.

Tomas will inherit a legacy of savage power from an ancient civilization. Pug’s destiny will lead him through a rift in the fabric of space and time to the mastery of the unimaginable powers of a strange new magic.

And so the Riftwar begins…

Author: Raymond E. Feist
Format: Other Format
Release Date: 06/12/2012
ISBN: 978-0-00-750979-9
Raymond E. Feist was born and raised in Southern California. He was educated at the University of California, San Diego, where he graduated with honours in Communication Arts. He is the author of the bestselling and critically acclaimed Riftwar saga among other books.

This ebook contains the entire trilogy The Riftwar Saga by bestselling author Raymond E. Feist, master of magic and adventure.

The ebook includes Magician, Silverthorn and A Darkness at Sethanon.