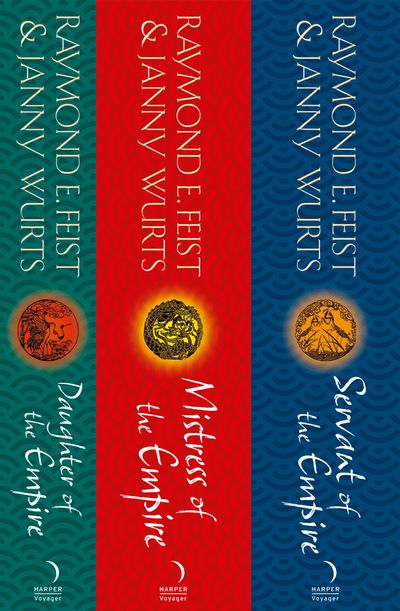 The critically acclaimed and bestselling Empire Trilogy by Raymond E. Feist and Janny Wurts, is now available in this ebook bundle.

At age 17, Mara’s ceremonial pledge of servantship to the goddess Lashima is interrupted by the news that her father and brother have been killed in battle on Trigia, the world through the rift.

Now Ruling Lady of the Acoma, Mara finds that not only are her family’s ancient enemies, the Minwanabi, responsible for the deaths of her loved ones, but her military forces have been decimated by the betrayal and House Acoma is now vulnerable to complete destruction…

Author: Raymond E. Feist and Janny Wurts
Format: Other Format
Release Date: 14/03/2013
ISBN: 978-0-00-751876-0
Feist is one of the world’s leading fantasy writers. His Riftwar and Serpentwar Sagas have been global bestsellers for years.Born and raised in Southern California, Raymond E. Feist was educated at the University of California, San Diego, where he graduated with honours in Communication Arts. He is the author of the bestselling and critically acclaimed Riftwar Saga.

The critically acclaimed and bestselling Empire Trilogy by Raymond E. Feist and Janny Wurts, is now available in this ebook bundle.