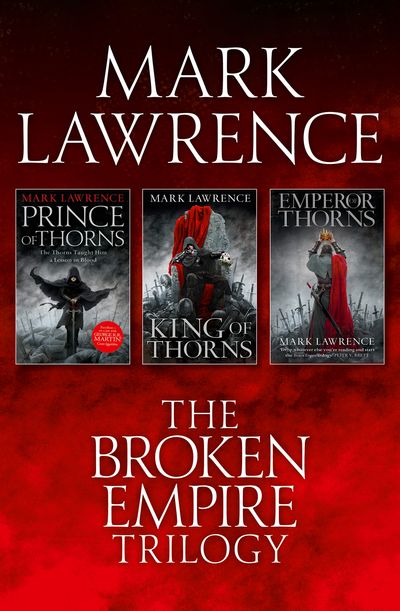 From being a privileged royal child, raised by a loving mother, Jorg Ancrath has become the Prince of Thorns, a charming, immoral boy leading a grim band of outlaws in a series of raids and atrocities. The world is in chaos: violence is rife, nightmares everywhere. Jorg has the ability to master the living and the dead, but there is still one thing that puts a chill in him. Returning to his father’s castle Jorg must confront horrors from his childhood and carve himself a future with all hands turned against him.

PRINCE OF THORNS, KING OF THORNS and EMPEROR OF THORNS are a remarkable new trilogy by one of fantasy fiction’s newest rising stars. Together, they weave a tale of blood and treachery, magic and brotherhood and paint a compelling and brutal, and sometimes beautiful, picture of an exceptional boy on his journey toward manhood and the throne.

Author: Mark Lawrence
Format: Other Format
Release Date: 06/11/2014
ISBN: 978-0-00-811370-4
Mark Lawrence was born in Champagne-Urbanan, Illinois, to British parents but moved to the UK at the age of one. He went back to the US after taking a PhD in mathematics at Imperial College to work on a variety of research projects including the ‘Star Wars’ missile defence programme. Returning to the UK, he has worked mainly on image processing and decision/reasoning theory. He says he never had any ambition to be a writer so was very surprised when a half-hearted attempt to find an agent turned into a global publishing deal overnight. His award-winning first trilogy, The Broken Empire, has been universally acclaimed as a ground-breaking work of fantasy. Mark is married, with four children, and lives in Bristol.