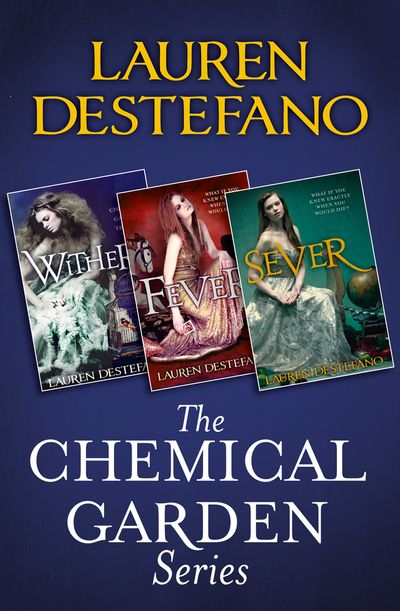 WITHER: What if you knew exactly when you would die?

16-year-old Rhine Ellery is kidnapped and sold as a bride to Linden, a rich young man with a dying wife. Even though he is kind to her, Rhine is desperate to escape her gilded cage. With the help of Gabriel, a servant she is growing dangerously attracted to, Rhine attempts to break free, in what little time she has left.

FEVER: Running away brings Rhine and Gabriel right into a trap, in the form of a twisted carnival whose ringmistress keeps watch over a menagerie of girls. Just as Rhine uncovers what plans await her, her fortune turns again. With Gabriel at her side, Rhine travels through an environment as grim as the one she left a year ago – surroundings that mirror her own feelings of fear and hopelessness.

SEVER: Time is running out for Rhine.

With less than three years left until the virus claims her life, Rhine is desperate for answers. Having escaped torment at Vaughn’s mansion, she finds respite in the dilapidated home of her husband’s uncle, an eccentric inventor who hates Vaughn almost as much as Rhine does.

Author: Lauren DeStefano
Format: Electronic book text
Release Date: 06/11/2014
ISBN: 978-0-00-811371-1
Lauren DeStefano is the author of The Internment Chronicles and The Chemical Garden Trilogy, which includes WITHER, FEVER, and SEVER. She earned her BA in English with a concentration in creative writing from Albertus Magnus College in Connecticut. Visit her at LaurenDeStefano.com.