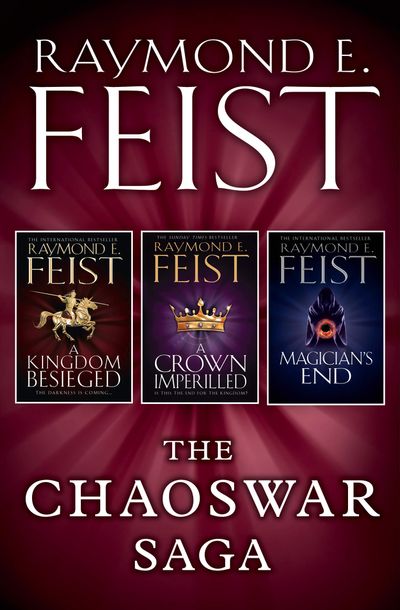 Return to a world of magic and adventure from bestselling author Raymond E. Feist. This bundle includes the complete Chaoswar Saga.

A KINGDOM BESIEGED: The Darkness is coming…

The Kingdom is plagued by rumour and instability. Kingdom spies in Kesh have been disappearing – either murdered, or turned to the enemy side. Information has become scant and unreliable; but one thing appears clear. Dark forces are on the move…

A CROWN IMPERILLED: War rages in Midkemia but behind the chaos there is disquieting evidence of dark forces at work.

MAGICIAN’S END: The dragons are calling…

Civil war is tearing apart the Kingdom of the Isles, for the throne lies empty and rivals are converging. Hal – now Duke of Crydee – must turn his attention to the defence of the ancient realm so that a king can be anointed by the Congress of Lords, rather than by right of might.

Author: Raymond E. Feist
Format: Other Format
Release Date: 20/11/2014
ISBN: 978-0-00-811372-8
Feist is one of the world’s leading fantasy writers. His Riftwar and Serpentwar Sagas have been global bestsellers for years.Born and raised in Southern California, Raymond E. Feist was educated at the University of California, San Diego, where he graduated with honours in Communication Arts. He is the author of the bestselling and critically acclaimed Riftwar Saga.

Return to a world of magic and adventure from bestselling author Raymond E. Feist. This bundle includes the complete Chaoswar Saga.