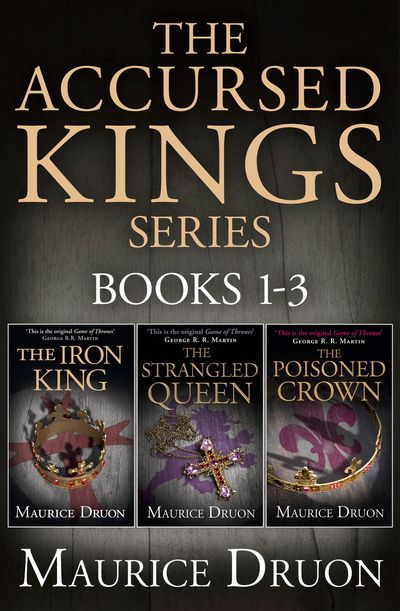 “This is the original Game of Thrones.” George R.R. Martin.

“Accursed! Accursed! You shall be accursed to the thirteenth generation!”

The Iron King – Philip the Fair – is as cold and silent, as handsome and unblinking as a statue. He governs his realm with an iron hand, but he cannot rule his own family: his sons are weak and their wives adulterous; while his red-blooded daughter Isabella is unhappily married to an English king who prefers the company of men.

A web of scandal, murder and intrigue is weaving itself around the Iron King; but his downfall will come from an unexpected quarter. Bent on the persecution of the rich and powerful Knights Templar, Philip sentences Grand Master Jacques Molay to be burned at the stake, thus drawing down upon himself a curse that will destroy his entire dynasty…

This bundle collects the first three novels of The Accursed Kings: THE IRON KING, THE STRANGLED QUEEN and THE POISONED CROWN.

Author: Maurice Druon
Format: Electronic book text
Release Date: 08/01/2015
ISBN: 978-0-00-811755-9
Maurice Druon was a French resistance hero, a Knight of the British Empire and a holder of the Grand Croix de la Légion d'Honneur. He was also a member of the Académie française and a celebrated novelist, best known for his series of seven historical novels under the title of The Accursed Kings, which were twice adapted for television. A passionate Anglophile, he was a great expert on all things English, including its medieval history, which provides great inspiration for the series. His many and diverse fans include George RR Martin, Nicolas Sarkozy and Vladimir Putin.

“This is the original Game of Thrones.” George R.R. Martin.