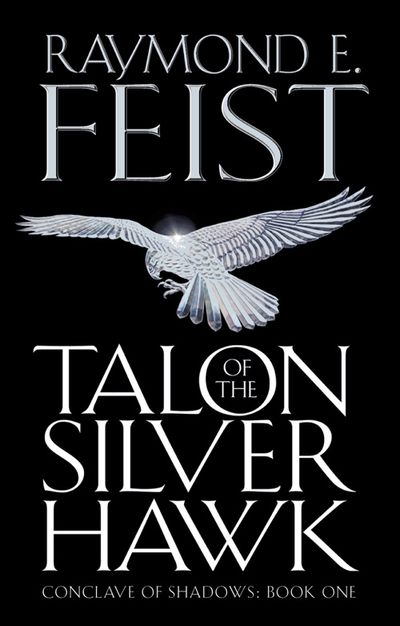 Talon of the Silver Hawk

For four days and nights Kieli has waited upon the remote mountain peak of Shatana Higo, for the gods to grant him his manhood name.

Exhausted and despairing, he is woken by the sharp claws of a rare silver hawk piercing his arm, though later he is not sure if it ever happened.

Devastation greets Kieli on his return home. His village is being burned, his people slaughtered. Although it means certain death, Kieli throws himself into the battle… and survives.

A distant voice echoes in his mind: Rise Up and be a talon for your people…

Now he is Talon of the Silver Hawk, and he must avenge the murder of his people, at whatever cost…

Talon of the Silver Hawk is the first book in the Conclave of Shadows trilogy. The second book in the trilogy is King of Foxes.

Author: Raymond E. Feist
Format: Other Format
Release Date: 13/09/2012
ISBN: 978-0-00-737380-2
Raymond E. Feist was born and raised in Southern California. He was educated at the University of California, San Diego, where he graduated with honours in Communication Arts. He is the author of the bestselling and critically acclaimed Riftwar Saga (Magician, Silverthorn, and A Darkness at Sethanon), Prince of the Blood, Faerie Tale and The King's Buccaneer. He is co-author (with Janny Wurts) of Daughter of the Empire, Servant of the Empire and Mistress of the Empire.The Serpent War Saga (Shadow of a Dark Queen, Rise of a Merchant Prince, Rage of a Demon King and Shards of a Broken Crown) has continued his phenomenal success, and his epic new Riftwar series includes bestsellers Krondor: The Betrayal, Krondor: The Assassins and Krondor: Tear of the Gods.

Talon of the Silver Hawk