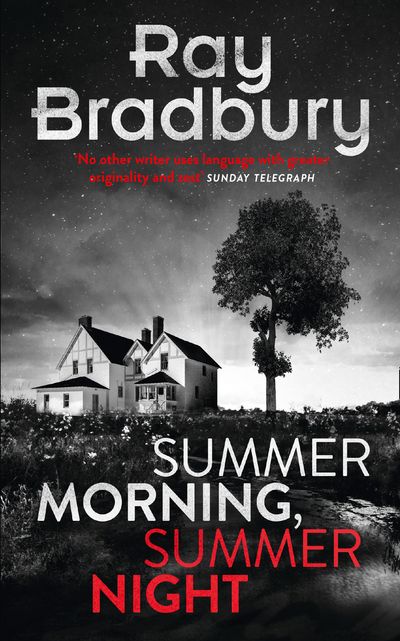 SUMMER MORNING, SUMMER NIGHT is a collection of short stories and vignettes based in Green Town, Illinois, the fictionalised version of Ray Bradbury’s native Waukegan, which also served as the setting for his modern classics DANDELION WINE, SOMETHING WICKED THIS WAY COMES, and FAREWELL SUMMER.

Among them are stories about a pair of elderly sisters who concoct a love potion with unexpected consequence; the careful affection between a teacher and her young student; the fireflies in the night who spark a conversation about life between a young boy and his grandfather. This is a beautifully woven tapestry of stories that illuminates some of Green Town’s hidden corners, and reaffirms Bradbury’s position as an undisputed master of fiction.

One of the greatest writers of the twentieth century, Bradbury is also the author of the iconic FAHRENHEIT 451, THE ILLUSTRATED MAN and THE MARTIAN CHRONICLES. He published some five hundred short stoires, novels and plays over his lifetime.

Author: Ray Bradbury
Format: Paperback
Release Date: 02/07/2015
Pages: 176
ISBN: 978-0-00-813288-0
One of the greatest science fiction and fantasy writers of all time, Ray Bradbury was born in Waukegan, Illinois, in 1920. He moved with his family to Los Angeles in 1934. Since his first story appeared in Weird Tales when he was twenty years old, he published some 500 short stories, novels, plays, scripts and poems. Among his many famous works are Fahrenheit 451, The Illustrated Man and The Martian Chronicles. Ray Bradbury died in 2012 at the age of 91.