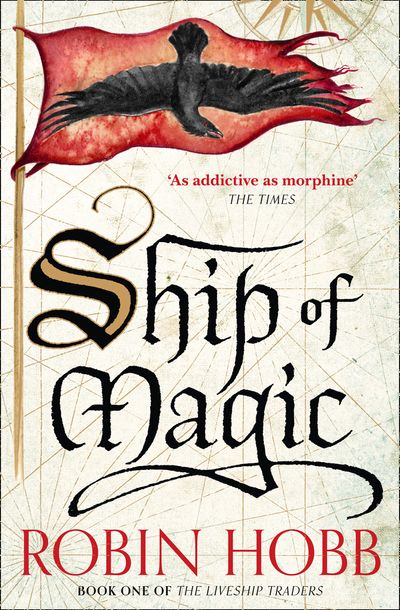 From the author of the classic Farseer trilogy, SHIP OF MAGIC is the first part of the Liveship Traders. Set in a land bordering the Six Duchies, Robin Hobb begins her epic tale of pirates, talking ships, magic, sea serpents, slave revolts, dashing heroes and bloody battles.

Wizardwood, the most precious commodity in the world, comes only from the Rain Wilds. But only a liveship can negotiate the perilous waters of the Rain Wild River, and liveships are hard to come by. They quicken only when three family members from successive generations have died upon their deck.

The liveship Vivacia is about to undergo her quickening: Althea Vestrit waits for the ship that she loves more than anything in the world to awaken. But her dream of taking her father’s place at Vivacia’s helm is not to be, for her family have other plans. . .

And the dark, charming pirate Kennit also lusts after such a ship: he well knows the power of wizardwood and has plans of his own . . .

Author: Robin Hobb
Format: Paperback
Release Date: 10/09/2015
Pages: 896
ISBN: 978-0-00-811745-0
Robin Hobb is one of the world’s finest writers of epic fiction.She was born in California in 1952 but raised in Alaska, where she learned how to raise a wolf cub, to skin a moose and to survive in the wilderness. When she married a fisherman who fished herring and the Kodiak salmon-run for half the year, these skills would stand her in good stead. She raised her family, ran a smallholding, delivered post to her remote community, all at the same time as writing stories and novels. She succeeded on all fronts, raising four children and becoming an internationally best-selling writer. She lives in Tacoma, Washington State.

From the author of the classic Farseer trilogy, SHIP OF MAGIC is the first part of the Liveship Traders. Set in a land bordering the Six Duchies, Robin Hobb begins her epic tale of pirates, talking ships, magic, sea serpents, slave revolts, dashing heroes and bloody battles.