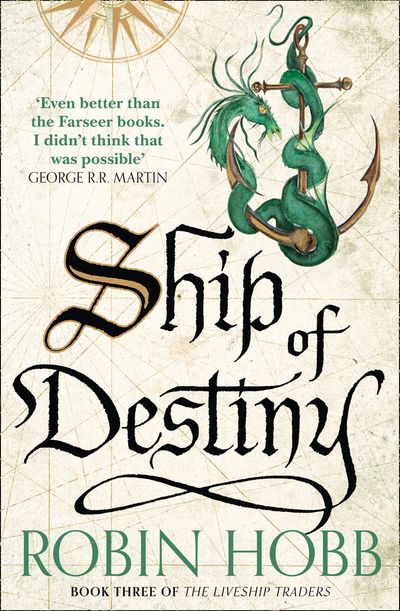 ‘Even better than the Farseer books. I didn’t think that was possible’ GEORGE RR MARTIN

The triumphant conclusion to the magnificent Liveship Traders series.

The dragon, Tintaglia, released from her wizardwood coffin, flies high over the Rain Wild River. Below her, Reyn and Selden have been left to drown, while Malta and the Satrap attempt to navigate the acid flow of the river in a decomposing boat.

Althea and Brashen are sailing the liveship Paragon into pirate waters in a last-ditch attempt to rescue the Vestrit family liveship, Vivacia, who was stolen by the pirate king, Kennit; but there is mutiny brewing amongst their ragtag crew, and in the mind of the mad ship itself.

And all the while the waters around the Vivacia are seething with giant serpents, following the liveship as she sails to her destiny . . .

Author: Robin Hobb
Format: Paperback
Release Date: 10/09/2015
Pages: 912
ISBN: 978-0-00-811747-4
Robin Hobb is one of the world’s finest writers of epic fiction.She was born in California in 1952 but raised in Alaska, where she learned how to raise a wolf cub, to skin a moose and to survive in the wilderness. When she married a fisherman who fished herring and the Kodiak salmon-run for half the year, these skills would stand her in good stead. She raised her family, ran a smallholding, delivered post to her remote community, all at the same time as writing stories and novels. She succeeded on all fronts, raising four children and becoming an internationally best-selling writer. She lives in Tacoma, Washington State.

‘Even better than the Farseer books. I didn’t think that was possible’ GEORGE RR MARTIN

The triumphant conclusion to the magnificent Liveship Traders series.