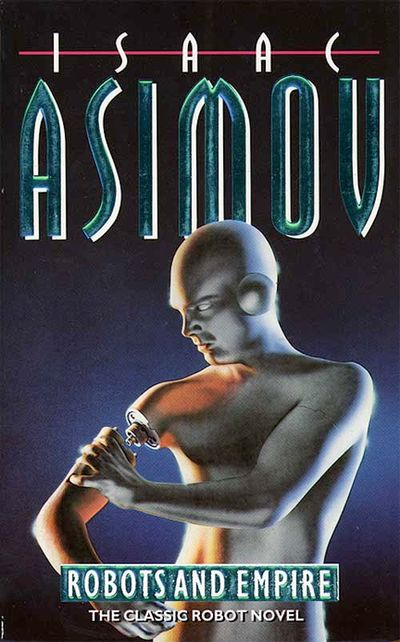 Isaac Asmiov’s classic novel about the decline and fall of Solaria.

Gladia Delmarre’s homeworld, the Spacer planet Solaria, has been abandoned – by its human population. Countless robots remain there. And when traders from Settler worlds attempt to salvage them, the robots of Solaria turn to killing…in defiance of the Three Laws of Robotics.

Long ago, Gladia’s robots Daneel and Giskard played a vital role in opening the worlds beyond the Solar system to Settlers from Earth. Now the conscience-stricken robots are faced with an even greater challenge. Either the sacred Three Laws of Robotics are in ruins – or a new, superior Law must be established to bring peace to the galaxy. With Madam Gladia and D.G. Baley – the captain of the Settler traders and a descendant of the robots’ friend Elijah Baley – Daneel and Giskard travel to the robot stronghold of Solaria…where they uncover a sinister Spacer plot to destroy Earth itself.

Author: Isaac Asimov
Format: Paperback
Release Date: 10/01/1994
Pages: 512
ISBN: 978-0-586-06200-5
Isaac Asimov, world maestro of science fiction, was born in Russia near Smolensk in 1920 and was brought to the United States by his parents three years later. He grew up in Brooklyn where he went to grammar school and at the age of eight he gained his citizen papers. A remarkable memory helped him finish high school before he was sixteen. He then went on to Columbia University and resolved to become a chemist rather than follow the medical career his father had in mind for him. He graduated in chemistry and after a short spell in the Army he gained his doctorate in 1949 and qualified as an instructor in biochemistry at Boston University School of Medicine where he became Associate Professor in 1955, doing research in nucleic acid. Increasingly, however, the pressures of chemical research conflicted with his aspirations in the literary field, and in 1958 he retired to full-time authorship while retaining his connection with the University.Asimov’s fantastic career as a science fiction writer began in 1939 with the appearance of a short story, ‘Marooned Off Vesta’, in Amazing Stories. Thereafter he became a regular contributor to the leading SF magazines of the day including Astounding, Astonishing Stories, Super Science Stories and Galaxy. He won the Hugo Award four times and the Nebula Award once. With nearly five hundred books to his credit and several hundred articles, Asimov’s output was prolific by any standards. Apart from his many world-famous science fiction works, Asimov also wrote highly successful detective mystery stories, a four-volume History of North America, a two-volume Guide to the Bible, a biographical dictionary, encyclopaedias, textbooks and an impressive list of books on many aspects of science, as well as two volumes of autobiography.Isaac Asimov died in 1992 at the age of 72.

Isaac Asmiov’s classic novel about the decline and fall of Solaria.