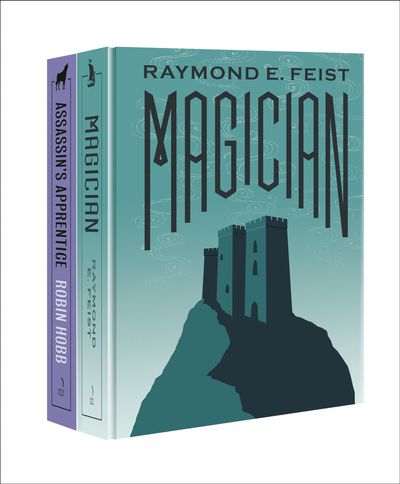 The perfect gift for any fantasy fan: two of the most beloved classics of the genre, together for the first time.

ASSASSIN’S APPRENTICE: the first book in the critically-acclaimed Farseer trilogy.

In a faraway land where members of the royal family are named for the virtues they embody, one young boy will become a walking enigma.

MAGICIAN: the first book in the bestselling Riftwar Cycle series.

At Crydee, a frontier outpost in the tranquil Kingdom of the Isles, an orphan boy, Pug, is apprenticed to a master Magician – and the destinies of two worlds are changed forever.

Author: Raymond E. Feist and Robin Hobb
Format: Other Format
Release Date: 25/11/2013
Pages: 1344
ISBN: 978-0-00-793938-1
Robin Hobb is one of the world’s finest writers of epic fiction.She was born in California in 1952 but raised in Alaska, where she learned how to raise a wolf cub, to skin a moose and to survive in the wilderness. When she married a fisherman who fished herring and the Kodiak salmon-run for half the year, these skills would stand her in good stead. She raised her family, ran a smallholding, delivered post to her remote community, all at the same time as writing stories and novels. She succeeded on all fronts, raising four children and becoming an internationally best-selling writer. She lives in Tacoma, Washington State.