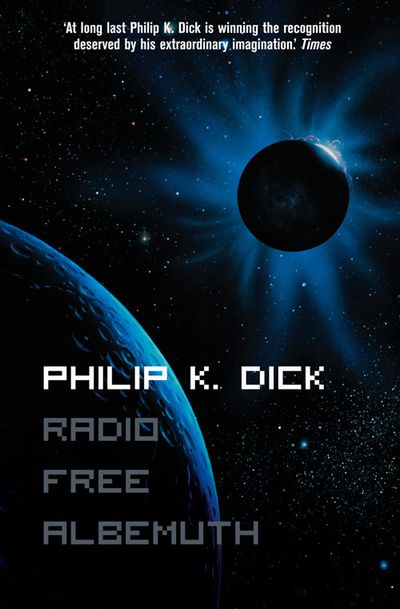 A preliminary to Dick’s masterwork, Valis, in which Phil appears as an explicitly named autobiographical character for the first time. Soon to be a major new film.

As America gasps in the stranglehold of a skull-crushing totalitarian regime, a supernatural intelligence speaks from the stars…

ARAMCHEK… the word scratched in the sidewalk of the President’s childhood home.

ARAMCHEK… the name of the subversive society ‘with no official membership’ whose sole purpose is to overthrow the American government.

ARAMCHEK… the word printed on a book which contains the President’s signature – a book in the hands of a Communist Party organiser.

ARAMCHEK… the name of a woman who may hold the key – and who has only weeks to live.

Will the agents of the omniscient Valis succeed in their mission of liberation? Or will the seek-and-destroy tactics of President Ferris F. Freemont extend the mind-numbing grip of the Antagonist across the parameters of the free world?

In Radio Free Albemuth, his last novel, Philip K. Dick morphed and recombined themes that had informed his fiction from A Scanner Darkly to VALIS and produced a wild, impassioned work that reads like a visionary alternate history of the United States. Agonizingly suspenseful, darkly hilarious, and filled with enough conspiracy theories to thrill the most hardened paranoid, Radio Free Albemuth is proof of Dick’s stature as our century’s greatest science fiction writer.

This prophetic novel of social control and political oppression is now to be turned into a major new movie starring Alanis Morrissette, which promises a provocative and edgy antidote to the summer blockbusters.

Author: Philip K. Dick
Format: Paperback
Release Date: 06/05/2008
Pages: 256
ISBN: 978-0-00-648285-7
Detailed Edition: Film tie-in edition
Philip K Dick was born in Chicago in 1928 and lived most of his life in California. He attended college for a year at Berkeley. Apart from writing, his main interest was music. He won the Hugo Award for his classic novel of alternative history, The Man in the High Castle (1962). He was married five times and had three children. He died in March 1982.

A preliminary to Dick’s masterwork, Valis, in which Phil appears as an explicitly named autobiographical character for the first time. Soon to be a major new film.